MANILA, Philippines—On the eve of the signing of a comprehensive peace agreement that will carve out a separate region for the nation’s Muslim minority, the government yesterday offered the olive branch anew to a disgruntled group of rebels who were left out of the deal. 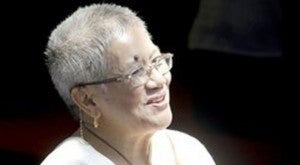 “We continue to invite the MNLF (Moro National Liberation Front) to join the other Bangsamoro leaders, sectors and communities in working together with the national government to bring about the best possible basic law for the Bangsamoro,” said Secretary Teresita Deles in a text message.

“Rather it seeks to benefit the entire Bangsamoro, and its achievements and lessons will surely radiate beyond the Bangsamoro to Mindanao and the entire country, and even beyond our shores,” she said.

Bangsamoro is the term the rebels prefer to refer to the Muslim people of Mindanao. It will also be the name of the entity or enclave or substate or region that will be created as a result of the peace agreement.

The leaders of the major factions of the MNLF as well as so-called “independents” are on the guest list of the Office of the Presidential Adviser on the Peace Process, headed by Deles.

“I continue to hope that the leadership of the various factions of the MNLF will decide to be part of this historic undertaking,” Deles said yesterday.

Followers of Nur Misuari, the founding leader of the MNLF, laid siege to several seaside villages in Zamboanga City in September last year, leaving more than 100 dead and forcing some 120,000 people to flee their homes.

“Everybody will reap the fruits of this peace. I know that with peace in Mindanao, this country can be great. It can be a great country,” the MILF’s chief negotiator, Mohagher Iqbal, had said last month.

Once it is signed, the comprehensive agreement will become the basis for the proposed Bangsamoro basic law that will be submitted to Congress for approval, to be followed by ratification in a plebiscite.

Senate President Franklin Drilon and Speaker Feliciano Belmonte Jr. have said the law could very well be enacted by the end of the year.

The basic law will become the legal basis for the creation of a new Bangsamoro territory that will encompass the region covered by ARMM and other areas.

Once a majority of the residents in the territory vote for the basic law, the ARMM is deemed abolished.

According to Deles, from the time the framework agreement was concluded in October 2012, the government has invited the MNLF to be part of the process of writing the Bangsamoro basic law.

“The relevant consensus points that we reached in the tripartite review of Republic Act No. 9054 (the 2001 law expanding the ARMM) will be incorporated in the Bangsamoro basic law, and they [the MNLF] may play a role in the transition period,” she said.

“The 2016 elections are likewise open to them as it is open to all other aspiring Bangsamoro political parties,” Deles added.

She said the government has been working with MNLF community leaders “to bring development projects and services” to their communities, including to the combatants.

As for the MNLF’s concerns about the 1996 pact, Deles said the Philippines has been calling on the Organization of the Islamic Conference (OIC), the group of Muslim-led countries, to convene the tripartite meeting to complete the review of the agreement that started in 2007, “so that we can move forward in renewed partnership, in addressing the new challenges that lie ahead.”

The review was facilitated by the OIC peace committee for southern Philippines chaired by Indonesia.