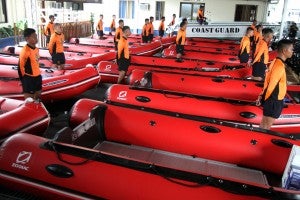 ILOILO CITY, Philippines—Twenty-one persons, including 14 foreigners, were rescued from a motorized boat off Cauayan town in Negros Occidental early Saturday after one of the vessel’s outriggers broke, the Philippine Coast Guard said Saturday.

No one was reported injured.

Meanwhile, the head of the Coast Guard station in Cebu, Cmdr. Rodolfo Villajuan, said at least 1,781 passengers were stranded in the ports of Cebu, Bohol and Negros Oriental after the Coast Guard barred vessels from sailing because of rough seas churned up by Tropical Depression Caloy.

Of the stranded passengers, 1,321 were in Cebu, 209 were in Tagbilaran in Bohol and 251 were in Dumaguete City in Negros Occidental.

Disaster councils in Bohol and Cebu were activated on Friday in anticipation of the tropical depression, the weakest class of tropical cyclones.

The foreigners rescued from the damaged boat included nine citizens of France, two from Switzerland, one each from Mexico, Germany and Spain, according to a report from Commodore Athelo Ybañez, Western Visayas Coast Guard commander.

The 78.8-gross-ton motorboat Ona  left the San Jose, capital of Antique, at 10 a.m. Friday enroute  to Oslob town in Cebu.

But its crew reported to the Coast Guard about 5 p.m. that the boat had limited maneuverability because of a damaged outrigger and they feared it might capsize because of the rough seas and strong winds.

The MT Francis Charles passed by the Ona about 9:45 p.m. on Saturday and established radio contact with the motorboat’s crew. But the passengers could not transfer to the tanker because of big waves.

The tanker’s crew was advised by the Coast Guard to keep watch over the smaller boat until a rescue vessel arrived.

The MCS 3006, a monitoring, control and surveillance ship of the Bureau of Fisheries and Aquatic Resource operated by Coast Guard personnel, reached the motorboat Ona about 11:12 p.m. 11 miles of Sojoton Point in Cauayan.

But rough seas prevented the transfer of the passengers to the MCS 3006, which escorted distressed vessel up to eight miles from Tandog Island off Nueva Valencia town in Guimaras where 11 of the foreigners were transferred to the rescue vessel at 3:35 a.m. on Saturday.

The MCS 3006 then proceeded to Iloilo City, arriving here at 6:40 a.m., according to the Coast Guard report.

Three other foreigners, who had organized a diving trip to Cebu, and the boat’s seven Filipino crew members opted to stay on the boat, which anchored on Sta. Ana bay in Nueva Valencia.

The Coast Guard report, however, did not say which of the foreigners stayed on the motorboat in Nueva Valencia.

The 11 foreigners  who arrived in Iloilo City underwent a medical checkup before they were billeted in a hotel to rest, according to Lt. Cmdr. Dominador Senador III, commander of the Coast Guard station in Iloilo.

Negros and Guimaras islands as well as southern Cebu and Bohol were among the areas placed under Signal No. 1 due to Tropical Depression Caloy.