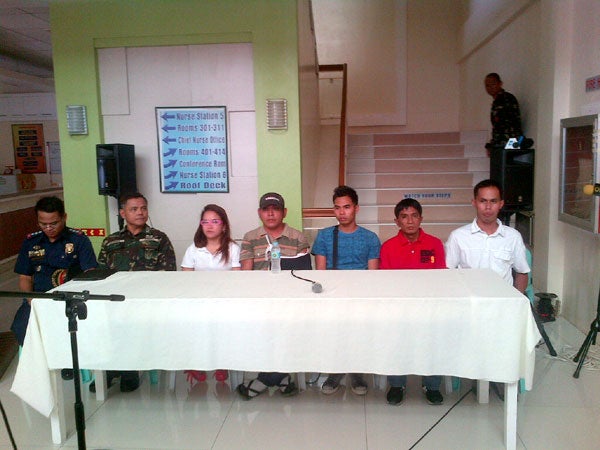 Victims of the recent landmine attack in Bansalan, Davao del Sur, together with police and military representatives, face the media at Digos Doctors Hospital.

DIGOS CITY, Philippines – The four rescuers of the Davao del Sur Provincial Disaster Risk Reduction and Management Council (PDRRMC) – who were injured in the March 2 landmine blast in Bansalan, Davao del Sur—said they were thankful for the P10,000 cash they got as indemnification from the New People’s Army.

But the blast victims, speaking through fellow wounded rescuer Bonita dela Cruz, said the indemnification did not constitute settlement.

Dela Cruz said while they had no intention to file charges on their own, they would cooperate with authorities in the investigation of the blast and the possible filing of cases against the rebels.

“We will cooperate if needed,” she said.

Earlier, Senior Supt. Michael John Dubria, Davao del Sur police director, said authorities were consolidating pieces of evidence that would be useful in the pursuit of charges against the rebels, who were identified in the two landmine attacks in Bansalan on March 2 – including the one that injured the rescue workers.

Dela Cruz and several other PDRRMC workers were on their way to retrieve soldiers injured in an earlier explosion there when the ambulance they were riding in was hit by landmine explosion.

Dubria said the police have not set any timetable for the filing of the charges, but added that the act of indemnification was among the possible evidence the authorities would use.

“It’s an admission of guilt,” he said.

As this developed, Dela Cruz, Arnel Veloroso and Alberto Cabual have returned to their jobs at the PDRRMC, Davao del Sur Gov. Claude Bautista said.

However, ambulance driver Genaro Dumayas was still recuperating from the multiple shrapnel injuries he sustained from the March 2 landmine blast and has not returned to his job yet, as of Thursday (March 20), he said.

In a related development, the Philippine Daily Inquirer noticed tightened security in and around the two municipalities where the nine suspected NPA members arrested in the wake of the March 10 Matanao raid were being detained.

Dubria said murder charges for the deaths of the two Matanao policemen have been filed against the nine suspects, along with three counts of frustrated murder, robbery in band and malicious mischief.

The military said it has been monitoring the movements of rebels and that more troops have been deployed in the hinterlands of Matanao, Bansalan and Magsaysay to prevent further rebel attacks.