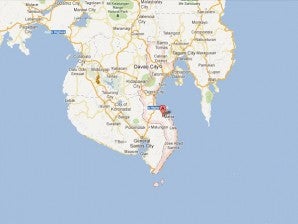 Dubria told the Philippine Daily Inquirer by text message that the suspect, Joel Abalayan, 43, a resident of this city, yielded a homemade .9 millimeter sub-machine gun and sachets of shabu (methamphetamine hydrochloride) valued at P50,000.

“As I have said, our intensified campaign is against the big ones,” he said.

“He yielded more sachets of shabu when frisked after the P1,000-marked money was recovered,” he said.

Dubria said charges of violation of the anti-drugs law and illegal possession of firearms were being prepared and would be filed soon against the suspect.