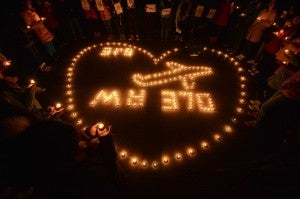 KUALA LUMPUR — A veteran Canadian pilot with over two decades experience in the cockpit believes that a fire, not a hijacking, is the main reason behind the disappearance of MAS flight MH370.

In a Google+ post, pilot Chris Goodfellow argues that the missing MH370 probably fell victim to a fire.

According to Goodfellow, the sharp turn executed by the plane points to a problem on the plane.

He wrote, “The left turn is the key here. (Capt) Zaharie Ahmad Shah was a very experienced senior captain with 18,000 hours of flight time. We old pilots were drilled to know what is the closest airport of safe harbor while in cruise. Airports behind us, airports abeam us, and airports ahead of us. They’re always in our head. Always.

“If something happens, you don’t want to be thinking about what are you going to do – you already know what you are going to do.

“When I saw that left turn with a direct heading, I instinctively knew he was heading for an airport. He was taking a direct route to Palau Langkawi, a 13,000-foot airstrip with an approach over water and no obstacles.

The captain did not turn back to Kuala Lampur because he knew he had 8,000-foot ridges to cross. He knew the terrain was friendlier toward Langkawi, which also was closer.”

Goodfellow also believes that an electrical fire could explain MH370’s failure to communicate.

“For me, the loss of transponders and communications makes perfect sense in a fire. And there most likely was an electrical fire.

“In the case of a fire, the first response is to pull the main busses and restore circuits one by one until you have isolated the bad one. If they pulled the busses, the plane would go silent. It probably was a serious event and the flight crew was occupied with controlling the plane and trying to fight the fire.

“Aviate, navigate, and lastly, communicate is the mantra in such situations,” Goodfellow wrote.

The veteran pilot also suggests that an electrical fire could have been caused by an overheat during takeoff.

He wrote, “Given the timeline, that there was an overheat on one of the front landing gear tyres, it blew on takeoff and started slowly burning. Yes, this happens with underinflated tyres.

“Once going, a tyre fire would produce horrific, incapacitating smoke. Yes, pilots have access to oxygen masks, but this is a no-no with fire. Most have access to a smoke hood with a filter, but this will last only a few minutes depending on the smoke level.”

He continues, “What I think happened is the flight crew was overcome by smoke and the plane continued on the heading, probably on George (autopilot), until it ran out of fuel or the fire destroyed the control surfaces and it crashed. You will find it along that route – looking elsewhere is pointless.”

Goodfellow thinks that the final “all right, good night” communication is indicative that everything was fine on the flight deck up to that point.

“There are many ways a pilot can communicate distress. A hijack code or even transponder code off by one digit would alert ATC that something was wrong,” Goodfellow wrote.

“Every good pilot knows keying an SOS over the mike always is an option. Even three short clicks would raise an alert. So I conclude that at the point of voice transmission all was perceived as well on the flight deck by the pilots.

“But things could have been in the process of going wrong, unknown to the pilots.”

Goodfellow is also of the opinion that the pilots were unaware that the ACARS system was not transmitting.

With regard the ascent to 45,000 feet, the pilot believes that there may have been a very good reason.

He says, “Let’s accept for a minute that the pilot may have ascended to 45,000 feet in a last-ditch effort to quell a fire by seeking the lowest level of oxygen. That is an acceptable scenario.

“At 45,000 feet, it would be tough to keep this aircraft stable, as the flight envelope is very narrow and loss of control in a stall is entirely possible.

“The aircraft is at the top of its operational ceiling. The reported rapid rates of descent could have been generated by a stall, followed by a recovery at 25,000 feet. The pilot may even have been diving to extinguish flames. But going to 45,000 feet in a hijack scenario doesn’t make any good sense to me.”