Most beautiful of pigeons to be freed into the wild 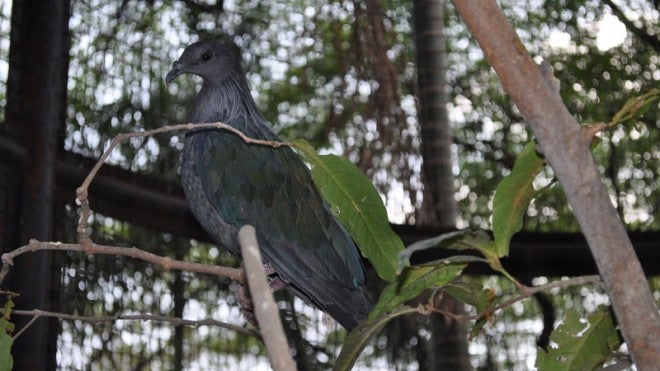 Photo shows one of the five Nicobar pigeons that will be released back into the wild this week after six years of rehabilitation at the environment department’s Wildlife Rescue Center in Quezon City. PHOTO COURTESY OF D.E.N.R.

MANILA, Philippines—Five Nicobar pigeons, considered among the most beautiful in the pigeon family but now in threatened numbers, will be released back into the wild this week after six years of rehabilitation at the environment department’s Wildlife Rescue Center in Quezon City, officials said on Tuesday.

The birds—three females and two males—will again fly freely at the world-famous Apo Reef Natural Park (ARNP) in the Sulu Sea, according to the Biodiversity Management Bureau (BMB) of the Department of Environment and Natural Resources (DENR).

“We are releasing these birds into the wild as an intervention to help increase their wild population,” Biodiversity Management Director Theresa Mundita Lim said in a news release.

The regal-looking Nicobar (Caloenas nicobarica) is considered “one of the most beautiful of the many pigeon species” and classified as “near threatened” on the Red List of the International Union for Conservation of Nature.

A native of Southeast Asia, the Nicobar pigeon is named after an island chain in the eastern Indian Ocean. The bird is locally called “Siete colores” (Seven colors) due to their shimmering, rainbow-like plumage, mostly consisting of blues and metallic greens.

Its distinctive white tail serves as taillight among the species during low-lit times of the day.

The pigeons feed on fruits, grains, seeds, insects and small invertebrates. The BMB has determined the presence of at least 22 species of fruit-bearing plants and 30 invertebrate species to sustain the pigeons on the ARNP.

Small, thriving populations of Nicobar pigeons have been found in lowland forests or mangroves on small, less-disturbed islands across the lower half of the country, and elsewhere in Asia.

They are, however, threatened by habitat destruction, or when hunted as part of the pet trade, as food, or for their gizzard stones which are used in jewelry.

The bird is also listed under Appendix I of the Convention on International Trade in Endangered Species, meaning international trade of the species is prohibited, and as “threatened” under the DENR Administrative Order No. 2004-15.

As such, commercial trade of these birds, especially those caught in the wild, is strictly prohibited, while captive breeding is only allowed for conservation-related purposes and if within legislative facilities, Lim said.

The five Nicobar pigeons were rescued from poachers by personnel of the DENR’s Central Luzon in Pampanga in 2008. The birds were admitted and rehabilitated at the Wildlife Rescue Center inside Ninoy Aquino Parks and Wildlife Center in Quezon City.

Lim, who will lead the release ceremony at the ARNP together with local government officials, said the 34-square-kilometer protected area off Sablayan town in Occidental Mindoro was an ideal breeding site for the pigeons.

The ARNP is the second largest contiguous coral reef in the world, next to Australia’s Great Barrier Reef. At least 33 Nicobar pigeons currently inhabit Apo, the largest of three islands that make up the reef.

Environment Secretary Ramon Paje said earlier that the government had been intensifying efforts to curb illegal wildlife trade in an effort to protect and conserve the country’s wildlife resources.

He likewise underscored the need for people to change their perception of wildlife as their personal property, saying “We should not look at [wildflife] as our property, but part of God’s creation that we are meant to coexist with here on earth.”

5 in smuggle of exotic birds, other animals face charge

Campaign on to save Navotas bird haven

Read Next
Stopgap measures eyed for power woes
EDITORS' PICK
Over 3 Million worth of prizes to be won at Smart Padala’s SENDali Manalo Promo!
Gear up and get ready to play with Yamaha Mio Gear
DOH: 28,471 new COVID-19 cases in PH; active cases now 284,458
Acer starts the year off strong with the Aspire Vero National Geographic Edition
On Day 2 of implementation, gov’t says workers now exempt from ‘no vax, no ride’ policy
Metro Manila posts lowest temperature yet this ‘amihan’ season at 19°C
MOST READ
In Batanes, octogenarian dies of COVID-19
Cold-case investigation names surprise suspect in Anne Frank’s betrayal
Emma Stone calls Andrew Garfield a ‘jerk’ after he ‘lied’ about his ‘Spider-Man: No Way Home’ appearance
Czech anti-vax singer dies after deliberate infection
Don't miss out on the latest news and information.