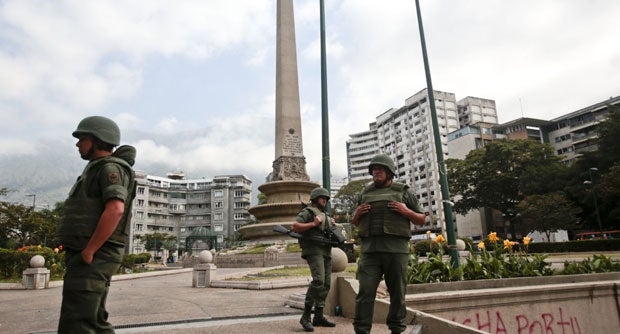 Bolivarian National Guards patrol Plaza Altamira in Caracas, Venezuela, Monday, March 17, 2014. Security forces on Monday took control of the plaza that has been at the heart of anti-government protests that have shaken Venezuela for a month. AP

ARACAS, Venezuela — Security forces on Monday took control of a Caracas plaza that has been at the heart of anti-government protests that have shaken Venezuela for a month.

Clusters of National Guardsmen patrolled Plaza Altamira and the principal streets extending from it while dozens of green-vested workers swept up debris that protesters used to block streets in the middle- and upper-class neighborhoods of eastern Caracas.

Other troops patrolled surrounding neighborhoods on motorcycles, and officials were making the takeover a public relations event. At least four Venezuelan government ministers were present giving interviews about the plaza’s “liberation.”

“We’re deployed since 3 a.m. in the entire municipality,” Interior Minister Miguel Rodriguez Torres said in an interview with state television from the plaza. “We’re re-establishing the right of thousands of citizens of Chacao who have been forced to stay inside their homes by violent actions.”

Hours after the first tear gas canister usually flies in near daily protest clashes, the plaza was free of flying rocks and water cannons Monday evening. Protesters with signs blocked the streets only when traffic lights turned red under the watchful gaze of the National Guard.

Earlier in the day, some student leaders vowed they would continue until the government meets their demands, the first of which is releasing those arrested during protests.

“You’re going to have to get 60 million soldiers for us to abandon the streets of Venezuela,” said Juan Requesens, president of the Central University of Venezuela, at a news conference.

Demonstrations have erupted in numerous parts of the country and the capital, though the graceful, sloping Plaza Altamira in the capital’s Chacao borough has become a focal point. Peaceful daily protests have devolved each afternoon into violent clashes with tear gas, rubber bullets, water cannons and Molotov cocktails.

Only a small segment of the demonstrators stick around for the skirmishes, but the damage wreaked by an even smaller subgroup has been highly publicized on state television.

Maduro has used the disorder for weeks to jab at opposition Mayor Ramon Muchacho for not having control of his area.

In a speech Saturday, Maduro warned protesters that they had only hours to clear Plaza Altamira or security forces would enter. Maduro referred to the demonstrators as “los Chuckys,” a reference to a diabolical doll in a U.S horror film series. There were clashes on the plaza Saturday and Sunday night as usual, but early Monday morning security forces entered the plaza with the apparent intention of staying.

Muchacho, who supports the peaceful protests, has maintained that public order is the responsibility of the state, not the municipality, and has blamed the National Guard and National Police for excessive force in putting down the demonstrations. He began holding community meetings asking residents to keep the protests peaceful and to not block streets.

Muchacho said via his Twitter account Monday that Chacao awoke “militarized” and added, “The militarization doesn’t resolve the crisis or the discontent.”

General Manuel Quevedo, the National Guard’s regional head in the capital, blamed a small group for trying to impose itself on the majority of people who want to live in peace in the area.

“With this situation we assure that every day the plaza is going to stay this way — calm, in peace,” Quevedo said in a television interview from the plaza.

Some local residents welcomed the government’s takeover of the plaza. “What I didn’t understand was the violence of making the barricades,” said Jorge Chayeb, 39, who lives nearby.

The protests have been joined by tens of thousands of Venezuelans, mostly from the middle class, who are fed up with inflation that hit 56 percent last year, soaring violent crime and shortages of basic necessities such as corn flour and cooking oil.

Guillen was shot in the head in a neighborhood where at least 40 “terrorists” were blocking streets with burning tires, El Aissami said. He blamed “fascist groups,” phrasing often used by government supporters to describe the opposition.

Prior to the shooting, the government had identified 25 deaths related to more than a month of protests in Venezuela. He would be the fourth National Guardsmen killed.