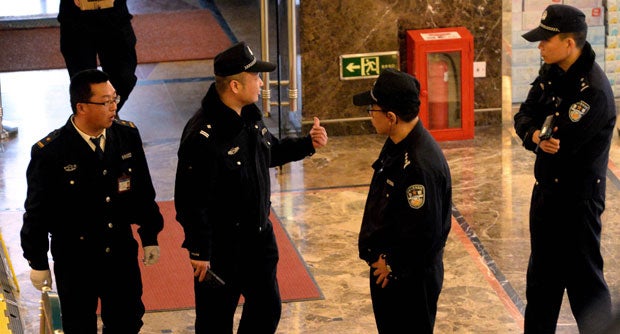 Chinese police stand at the entrance of the Metro Park Lido Hotel where relatives of passengers from missing Malaysia Airlines flight MH370 have gathered in Beijing on March 17, 2014. An investigation into the pilots of missing Malaysia Airlines flight 370 intensified on March 17 after officials confirmed that the last words spoken from the cockpit came after a key signalling system was manually disabled. AFP

KUALA LUMPUR – An investigation into the pilots of missing Malaysia Airlines Flight 370 intensified Monday after officials confirmed that the last words spoken from the cockpit came after a key signalling system was manually disabled.

US intelligence efforts were also focusing on Captain Zaharie Ahmad Shah and his first officer, Fariq Abdul Hamid, according to a senior US lawmaker.

“I think from all the information I’ve been briefed on from, you know, high levels within homeland security, national counterterrorism center, intelligence community, that something was going on with the pilot,” said Michael McCaul, the chairman of the House Homeland Security Committee.

“I think this all leads towards the cockpit, with the pilot himself, and co-pilot,” McCaul said on Fox News Sunday.

Malaysia’s transport minister confirmed Sunday that an apparently relaxed final voice communication from the cockpit – “All right, good night” – came after the Aircraft

Communications Addressing and Reporting System (ACARS) had been deliberately shut down.

ACARS transmits to the ground key information on a plane’s condition.

It has not been confirmed who gave that final voice message. But the assumption is the person would have known the ACARS system had been disabled.

The plane’s transponder – which relays radar information on the plane’s location – was switched off 14 minutes after ACARS went down.

Shortly afterwards the plane disappeared from civilian radar, but Malaysia has since confirmed that the air force tracked it for hours on military radar – without taking action.

The plane went missing early in the morning of March 8 with 239 passengers and crew aboard, spawning a massive international search across Southeast Asia and the Indian Ocean that has turned up no trace of wreckage.

Two-thirds of the passengers on board the flight were Chinese, and state media in China attacked Malaysia anew on Monday for its handling of the crisis.

“The contradictory and piecemeal information Malaysia Airlines and its government have provided has made search efforts difficult and the entire incident even more mysterious,” the China Daily newspaper wrote in an editorial.

“What else is known that has not been shared with the world?” it asked.

For relatives of those on board, the indications that the plane was taken over in some way provides a slim hope that it might have landed undetected somewhere and that those on board are still alive.

“If they found the wreckage of the plane then that would be finalised because there’s no hope,” said Australian David Lawton, whose brother was on the plane.

“But while you’ve got hope, you’ve got worries too. Because if they’re alive, are they being treated well, or what’s happening?” he told Fairfax media.

The number of countries involved in the physical search for the jet has nearly doubled to 25, after satellite and military radar data projected two dauntingly large and contrasting corridors the plane might have flown through, to the north and south.

“We are now looking at large tracts of land, crossing 11 countries, as well as deep and remote oceans,” said Hishammuddin Hussein, Malaysia’s minister of both transport and defense.

The southern corridor extends deep into the southern Indian Ocean towards Australia, while the other stretches north in an arc over south and central Asia.

Australian Prime Minister Tony Abbott on Monday said he had no information that the aircraft may have come anywhere close to Australia.

“But all of our agencies that could possibly help in this area are scouring their data to see if there’s anything that they can add to the understanding of this mystery,” Abbot told reporters.

The China Maritime Search and Rescue Center has asked Chinese merchant ships in the Indian Ocean, Bay of Bengal and the waters to the west of Australia to provide assistance.

The Malaysian authorities have stressed that the backgrounds of all the passengers and crew are being checked – as well as engineers who may have worked on the plane before take-off.
Police have searched both pilots’ residences and are examining a flight simulator that Captain Zaharie had installed at his home.

Zaharie was a member of the party of Malaysian opposition leader Anwar Ibrahim.

A day before the flight, a Malaysian court overturned Anwar’s 2012 acquittal on charges he sodomised a male former aide and sentenced him to five years in jail.

Anwar calls the charges a sham cooked up by Malaysia’s long-ruling government to drive him from politics.

There is, however, no indication yet that Zaharie’s political affiliations have figured in the investigation.

First Officer Fariq’s record was queried after a South African woman said he had allowed her and a friend to ride in the cockpit of a 2011 flight, in violation of security rules imposed after the 9/11 attacks in the United States.

Hishammuddin noted that the two pilots “did not ask to fly together” on flight 370.