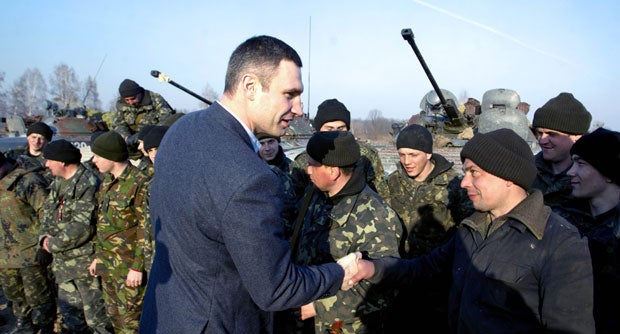 his handout picture released by the Udar Party Press Service show the leader of Ukrainian UDAR (Punch) political party Vitali Klitschko (L) shaking hands of a soldier after military exercises not far from city of Zhytomir, near the city of Zhytomir, some 150 km from Kiev on March 14, 2014.Ukraine braced on March 15, 2014 for a breakaway vote in Crimea as deadly violence flared again in the ex-Soviet country’s tinderbox east amid the biggest East-West showdown since the Cold War. The second successive day of deadly unrest that has now claimed three lives in the mainly Russian-speaking east of the country came hours after Moscow, whose forces have seized control of Crimea, warned that it reserved the right to “protect” compatriots in the whole of Ukraine. AFP

UNITED NATIONS — Supporters of Ukraine’s territorial integrity are hoping to demonstrate the strength of opposition to Russia’s takeover and possible annexation of the Crimean Peninsula in a U.N. Security Council vote on Saturday.

The resolution being put to a vote would reaffirm the council’s commitment to Ukraine’s territorial integrity and declare that Sunday’s referendum on whether Crimea should become part of Russia “can have no validity, and cannot form the basis for any alteration of the status of Crimea.”

Supporters know the U.S.-sponsored resolution is virtually certain to be vetoed by Russia, a permanent council member.

But U.S. Ambassador Samantha Power said the resolution is aimed at “showing the extent of Russia’s isolation as it pursues a non-peaceful path.”

Supporters are certain that 13 of the 15 council members will vote “yes” and are hoping that China, a close ally of Russia, will abstain rather than join Russia in vetoing the measure.

The draft resolution would reaffirm the Security Council’s commitment “to the sovereignty, independence, unity and territorial integrity of Ukraine within its internationally recognized borders.” It also urges all parties “to pursue immediately the peaceful resolution of this dispute through direct political dialogue,” to protect the rights of minorities in Ukraine.

China is very sensitive to the issue of territorial integrity because of Tibet and other restive areas, and China’s U.N. Ambassador Liu Jieyi reiterated Beijing’s support again Thursday for Ukraine’s sovereignty and territorial integrity, and for not interfering in other countries’ internal affairs.

The Security Council has held six meetings on Ukraine in less than two weeks but has been unable to take any action because of Russia’s veto power.

Lavrov said Moscow will make no decisions about Crimea’s future, including whether to embrace it as a new territory, until after Sunday’s vote, but Kerry said the results are all but a foregone conclusion, and urged Russia’s parliament against accepting any offer to claim Crimea as its own.