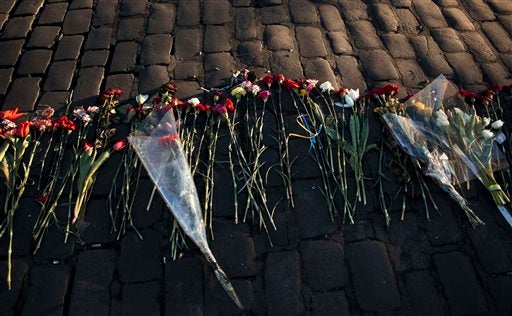 Flowers placed by people in memory of those who died in late February’s clashes are lit by the early morning sun in Kiev’s Independence Square, Ukraine, Tuesday, March 11, 2014. AP

KIEV, Ukraine — The Crimean parliament has voted that the Black Sea peninsula will declare itself an independent state if its residents vote to split off from Ukraine and join Russia in a referendum on Sunday.

Crimea’s regional legislature on Tuesday adopted a “declaration of independence of the Autonomous Republic of Crimea.”

The document specified that Crimea will become an independent state if its residents vote in favor of joining Russia in the referendum.

Western nations have said they will not recognize the vote as legitimate.

Crimea’s new leader, a man with a murky past

Obama vs Putin: Getting personal over Crimea