Timeline: The hunt for flight MH370 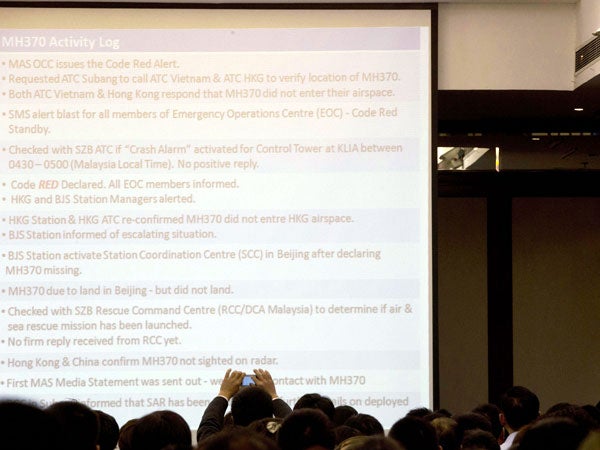 A relative of Chinese passengers aboard missing Malaysia Airlines flight MH370 takes a photo of a slideshow displaying the chronology of events since the plane went missing during a press conference held by Hugh Dunleavy, right bottom, commercial director of Malaysia Airlines at right in a hotel in Beijing, China, Friday, March 14, 2014. AP

HONG KONG — Friday marks day seven of the search for the missing Malaysia Airlines jet, as the hunt widens into the vast Indian Ocean.

Here is a timeline of major developments since the plane vanished early Saturday with 239 people on board, en route from Kuala Lumpur to Beijing:

— Malaysia Airlines says the Boeing 777 lost contact with air traffic control at around 1:30 a.m. (1730 GMT Friday), about an hour after take-off from Kuala Lumpur International Airport. Initially, authorities had put the last contact time at 2:40 a.m.

— Vietnam says the plane went missing near its airspace. It launches a search operation that expands into a huge international hunt in the South China Sea, involving dozens of ships and aircraft from countries including the US and Japan.

— Tearful relatives of the 153 Chinese passengers criticise Malaysia Airlines over a lack of information.

— It also emerges that two passengers were travelling on stolen EU passports, fuelling speculation of a terrorist attack.

— Malaysia says it is probing a possible terror link to the jet’s disappearance. The US sends FBI agents to assist in the investigation.

— Malaysia raises the first of several suggestions that the plane may have veered radically off-course — with the air force chief saying it may have turned back towards Kuala Lumpur for no apparent reason.

— A Vietnamese plane spots possible debris off southwest Vietnam — but this too yields no sign of the airliner.

— Authorities double the search radius to 100 nautical miles (equivalent to 185 kilometres) around the point where MH370 disappeared from radar.

— China lashes out at Malaysia, saying it needs to speed up the investigation.

— Malaysia sends ships to investigate a sighting of a possible life raft, but a Vietnamese vessel that gets there first finds only flotsam.

— Chemical analysis by Malaysia disproves any link between oil slicks found at sea and the missing plane.

— The search area now includes land on the Malaysian peninsula itself, the waters off its west coast, and an area to the north of Indonesia’s Sumatra island — all far removed from the flight’s scheduled route.

— Authorities identify the two men with stolen passports as young Iranians who are believed to be illegal immigrants — not terrorists.

— Malaysia expands the search zone to include the Malacca Strait off the country’s west coast and the Andaman Sea north of Indonesia, hundreds of kilometres away.

— Malaysia’s air force chief says an unidentified object was detected on military radar north of the Malacca Strait early Saturday — less than an hour after the plane lost contact — but says it is still being investigated.

— At a heated news conference, Malaysian officials deny that the search is in disarray after China says conflicting information about its course is “pretty chaotic”.

— It emerges that US regulators warned months ago of a “cracking and corrosion” problem on Boeing 777s that could lead to a mid-air break-up — but the manufacturer later confirms that the warning did not apply to the missing plane, which had a different kind of antenna.

— Malaysia dismisses a report in the Wall Street Journal which said US investigators suspect the plane flew on for four hours after its last known contact, based on data sent from its engines.

— Authorities in Kuala Lumpur also say that Chinese satellite images of suspected debris in the South China Sea are yet another false lead.

— India steps up its search, sending three ships and three aircraft to the remote Andaman and Nicobar Islands.

— The hunt spreads west to the Indian Ocean after the White House cites unspecified “new information” that the jet may have flown on after losing contact.

— Malaysia declines to comment on US media reports that cite US officials as saying the plane’s communication system — not the engines — continued to “ping” a satellite for hours after it disappeared, suggesting it may have travelled a huge distance.

— A US warship, initially deployed to Thailand, is among the vessels heading to the Indian Ocean.
RELATED STORIES