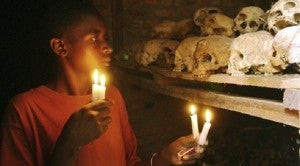 In this April 6, 2004 file photo, Apollan Odetta, a survivor from the 1994 Rwandan Genocide light candles at a mass grave in Nyamata, Rwanda. T. AP FILE PHOTO

After five-and-a-half weeks of hearings, the jury retired to discuss charges of complicity in genocide and war crimes against 54-year-old Pascal Simbikangwa over the 1994 genocide that left at least 500,000 dead, mostly ethnic Tutsis. A verdict was expected later Friday.

In 15-minute final remarks, the disabled former high-ranking government official insisted he never saw dead bodies, appealed to the jury’s “conscience” and asked for a prayer for Tutsis and Hutus who died.

France—a former colonial power in Africa which had strong ties to the Hutu government—has faced accusations of acting too slowly to bring those behind the genocide to justice.