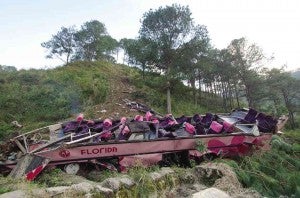 The driver of the GV Florida Transport bus that fell off a cliff and killed 14 people in Bontoc, Mt. Province, on Feb. 7 may have been speeding, according to a government forensic team. RICHARD BALONGLONG FILE PHOTO

MANILA, Philippines – The Land Transportation Franchising and Regulatory Board (LTFRB) suspended for six months the operations of the GV Florida Transport after it was found that one of its buses had faulty brakes, which resulted in the death of 14 passengers when it plunged into a ravine in Bontoc in February.

According to television and reports, LTFRB chairman Winston Ginez said the findings showed that brake malfunction caused the GV Florida Transport bus to lose its control and tumble down a ravine in Bontoc, Mountain Province last Feb. 7.
This confirmed the preliminary investigation of LTFRB that the bus had loose brakes.

The board also found out that the bus was authorized under the name of Norberto Cue, who had not filed an approval for the sale and transfer to Florida Transport.

This means that the Florida Transport was not authorized to operate the bus, LTFRB said.

The LTFRB suspended all the 188 buses of the Florida for six months over the accident, reports said.

Among those killed were comedian Arvin “Tado” Jimenez, musician David Sicam, visual artist Gerard Baja, and 11 others. Meanwhile, 32 were injured including the driver and the conductor.

The crash came more than a month after a Don Mariano Transit bus fell off the Skyway near Bicutan crashed onto a van below. The accident killed 19, including the bus driver.