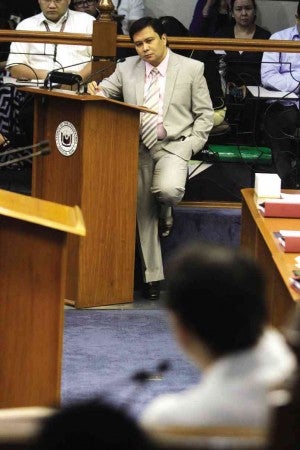 Sen. Jinggoy Estrada stands on one leg during interpellation at the Senate on Wednesday. NIÑO JESUS ORBETA

MANILA, Philippines—Sen. Jinggoy Estrada on Wednesday accused the Aquino administration of giving special treatment to Ruby Tuason and Dennis Cunanan in exchange for testimonies that singled him out, along with Senators Juan Ponce Enrile and Ramon Revilla Jr., as the culprits in the P10-billion pork barrel scam.

In a privilege speech, Estrada said an undersecretary of the Department of Justice (DOJ) whom he did not name had repeatedly instructed witnesses to concentrate their testimonies on the culpability of the three senators.

Cunanan and Tuason are under investigation in connection with the scam. They have offered to become witnesses for the prosecution to escape indictment.

“Are these the kind of witnesses that the [DOJ] is now staunchly vouching and spending for under its Witness Protection Program? People who cannot be honest about their real educational background (Cunanan)? People who would not hesitate to drag the name of a dead brother just to conceal their own guilt (Tuason)?” Estrada said.

“Has the DOJ deliberately omitted these facts and information from the blue ribbon committee and the public just to support and build their case? Is this the handiwork of an undersecretary of the DOJ, who, I am informed by unimpeachable sources, has repeatedly instructed the witnesses to focus only on this representation and Senators Enrile and Revilla?”

In Cunanan’s case for instance, Estrada said the Commission on Audit (COA) special report on the Priority Development Assistance Fund (PDAF) showed that P2.44 billion was released by more than 200 lawmakers to his Technology Resource Center (TRC) in 2007, 2008 and 2009.

“If what [Cunanan] was saying was true, that he was calling lawmakers to verify their signatures, who else did he call? Didn’t his former boss in the House of Representatives talk to him? Didn’t the representative of Pampanga, who was his townmate, approach him about [the] PDAF?” Estrada said.

“Doesn’t he remember the others who talked to him or was he told to only remember and mention Enrile, Revilla and Estrada? More than 200 legislators, more than P2 billion in PDAF transactions went through the TRC. Now, all Cunanan remembers are just three senators and a few NGOs (nongovernment organizations). Why?”

Estrada said the total of his, Enrile and Estrada’s PDAF allocations that went through the TRC and certain NGOs in those three years only amounted to P250 million. “Where was the remainder—P2.2 billion?”

“In some of his statements to the media, and he repeatedly said this during the blue ribbon committee hearing, he said that the TRC stopped implementing PDAF-funded projects when he became its director general in 2010,” Estrada said.

Estrada said that despite Cunanan’s statement that the TRC stopped processing PDAF-funded projects when he became the director general in 2010 and that he had certain recipient NGOs blacklisted, the agency continued to receive millions of pesos in pork barrel funds that it even disbursed to its discredited NGOs.

Estrada added that also in 2012, under “cash funds to NGOs/POs,” there was an entry for P42 million.

Estrada said the TRC in 2012 also had “collection held in trust from the Disbursement Acceleration Program or DAP” worth P45 million. He was referring to President Aquino’s pork barrel purportedly from government savings.

“Perhaps, that’s the reason why Cunanan said there was no more PDAF [in the TRC], it was because he was preoccupied with the DAP,” Estrada said.

In Tuason’s case, Estrada said it was apparent that she was being given special treatment as she was “fetched and grandly escorted back to Manila by NBI agents in February this year.”

“Noticeably, while in Manila, Mrs. Tuason was pampered with security complete with a yaya who carries her bag while [she] struts around, hailed her as a slam-dunk hero, a buzzer-beater and three-point winning shooter,” Estrada said.

Estrada said there was no way Tuason’s late brother, Remy Chan, was the one who benefited from the multimillion-peso Malampaya Fund scam since he repeatedly asked for assistance from Estrada’s office when he got sick with cancer.

“It is also said that Mrs. Tuason will be free of all criminal liabilities even from the Malampaya Fund scam on the flimsy alibi that it was her dead brother, and not she, [who] was involved,” Estrada said.

“And now here comes the fishy exit abroad, courtesy of the Department of Justice,” he said.

Tuason recently left the country for the United States supposedly to look for ways to finance her commitment to return the P40 million she allegedly earned from the scam.

“It was all too clever and very convenient for Mrs. Tuason to put all the blame and guilt on her dead brother, isn’t it? As the known idiomatic expression goes, ‘Dead men tell no tales,’” Estrada said.

“This is just like Mr. Dennis Cunanan, citing a dead congressman,” Estrada added.