Probe of new estafa case vs Lee to start next week 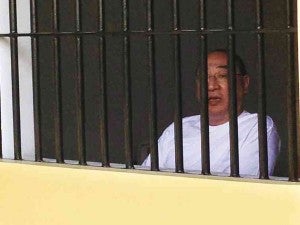 MANILA, Philippines—The preliminary investigation of another syndicated estafa case against Delfin Lee and six others is scheduled next week in the Department of Justice following the expiration of the temporary restraining order issued by a Pasig City judge, according to a source from the National Bureau of Investigation.

Thirty buyers of units in Xevera subdivision in Pampanga filed the case.

The source, who asked not to be named, said the syndicated estafa case that the NBI was investigating was different from the case filed by the Pag-Ibig Fund, which led to the arrest and detention of Lee.

Three more sets of syndicated estafa complaints against Lee and other Globe Asiatique officials were pending in the NBI, he said.

The source said one of the respondents in the new complaint was Divine Lee, the daughter of the housing developer.

Divine Lee, based on records of the Security and Exchange Commission, was the chief executive officer of Globe Asiatique Tower 2 Condominium on Edsa in Mandaluyong City.

The source said that based on the complainants’ statements, the houses they purchased from Lee’s company were in other people’s names and were mortgaged to Pag-Ibig without their knowledge.