MANILA, Philippines – Senator  Jose “Jinggoy” Estrada took the floor  on Wednesday to expose what he described as “dubious backgrounds and “shady dealings” of  two government witnesses in the  P10-billion  “pork barrel” funds scam.

In a privilege speech entitled, “The tale of two incredible witnesses,” Estrada revealed that Ruby Tuason was said to have  received P242-million kickbacks from  the Malampaya funds, and Dennis Cunanan, director general on-leave of the Resource Technology Center (RTC), had allegedly travelled more or less 80 times in 10 years. 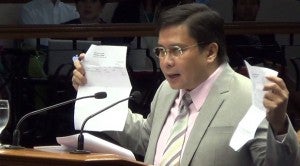 Estrada, Tuason and  Cunanan were all charged at the Office of the Ombudsman over the scam, but Tuason and Cunanan later decided  to turn against the senator.

“I rise today, Mr. President,  to expose and bring to the public’s attention the questionable character of this  latest witness of the DOJ (Department of Justice), Mr. Dennis Cunanan as well as Mrs. Ruby Tuason, to alert  us of their dubious backgrounds and shady  dealings,” Estrada said.

“It may be instructive for the DOJ so that it may redeem itself from sloppy and amateurish investigation of the witnesses it presents in support of what it proclaims as its supposed air-tight case.”

Estrada started with Cunanan, who he said should have been held in contempt for “lying over and over and over again under oath” before the Senate blue ribbon committee, which  has been investigating the scam.

The senator first questioned Cunanan’s claim when he testified in the Senate that he was just renting a house in White Plains in  Quezon City from his brother, Darius.

Based on documents that he obtained, Estrada said, Darius bought the property in 2007 at P12 million when his income from his own  business was only around P104, 668.98.

And contrary to Cunanan’s claim that the house was loaned from the bank, Estrada said the property was paid in cash.

Estrada said the loan that Cunanan was referring to in August 2007 was for the family’s trading company named “Magalang Ciudad Enterprises Inc., in which the TRC chief was said to be the majority share holder.

The house, he said, was only used as  the collateral of the loan.

“Given all these facts, is Darius Cunanan or Dennis Cunanan the real owner of the White Plains property? You can make your own conclusion,” said the senator.

When Cunanan was presidential assistant for  youth affairs during  the time of then President Gloria Macapagal-Arroyo,  Estrada said,  the  TRC head was able to get a cash advance of P6.4 million in 2004.

Until now since 2004, he said, Cunanan still has an outstanding and unliquidated cash advance of P4.6 million.

Estrada also claimed that even before Cunanan testified on the scam, he already heard about him being a “jet-setter.”

After Cunanan, Estrada went directly to expose Tuason so that the DOJ “may rethink and reconsider its policy of picking stray cats just to build its case.”

Estrada said Tuason owned a P45 million “house and lot in Dasmariñas Village in Makati City, which she allegedly acquired in 2009.

The Dasmariñas property, he said, was dubbed as “Malampaya mansion” because the money used to buy the properties was part of the P242-million kickbacks  she allegedly got from the  Malampaya gas funds.

Aside from the mansion, Estrada said Tuason, using her kickbacks,  was able to put a corporation, the  Rubysons Inc.,  in October 2009 and an P80-million capitalized corporation allegedly for her sons.

“Obviously not content with the multi-million corporation, Mrs. Tuason also put up a high-end jewelry store in a plush hotel in August 2013 managed by her niece, Jocelyn. Easily, this investment is again worth so many millions, Mr. President,” said the senator.

Estrada said Tuason also bought in 2008 membership shares at the Manila Polo Club, which were said to be worth P12 million, for her two sons, a real estate at the Las Vegas Country Club said to be worth P6.3 million; and a property in Oakland, California worth $150,000 in September 2013.

Tuason, he said, also allegedly owned a house in Henderson, Nevada, Kawayan Cove in Cavite and other properties in the Philippines.