MANILA,  Philippines – Senator Jose “Jinggoy” Estrada  on Wednesday  bared an alleged  P45-million   “Malampaya Mansion” at a posh  village in Makati City  and  other  multi-million peso   properties and business of his accuser, Ruby Tuason. 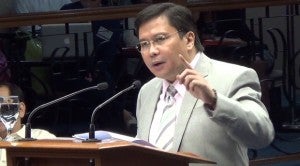 Estrada and  Tuason are both  charged with plunder in connection with the  P10-billion “pork barrel” funds scam. But Tuason later turned against the senator.

The  money used  to buy the property,   Estrada said, was said to be the fruit of  Tuason’s kickbacks from Malampaya funds. He did not elaborate.

Estrada said  Tuason’s kickbacks  from Malampaya funds were said to have reached  about  P242 million.

Aside from the mansion in Makati,   Tuason  also allegedly put  up an P80-million capitalized corporation,  a jewelry store managed by her niece, bought  another real estate each in  Las Vegas and California, a house in Nevada and  several other properties in the Philippines.