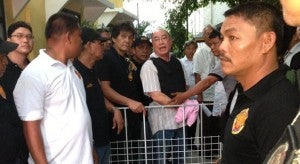 This, after the Supreme Court has stopped the implementation of the Court of Appeal’s ruling that lifted the warrant of arrest issued against him.

“The TRO (temporary restraining order) is effective immediately and continuing until further orders and is directed against the implementation of the Court of Appeals Nov. 7, 2013 decision which (a) annulled and set aside the orders dated May 22, 2012 and August 22, 2012 issued by Judge Amifaith Fider-Reyes and (b) quashed, recalled and lifted the warrant of arrest that the latter judge issued against petitioner Delfin Lee pursuant to such resolution,” the high court said in its ruling.

A high court source said the ruling in effect reinstated the syndicated estafa case against him and he will remain in detention.

Also, the habeas corpus pending with the Court of Appeals will become moot and academic, the same source said.