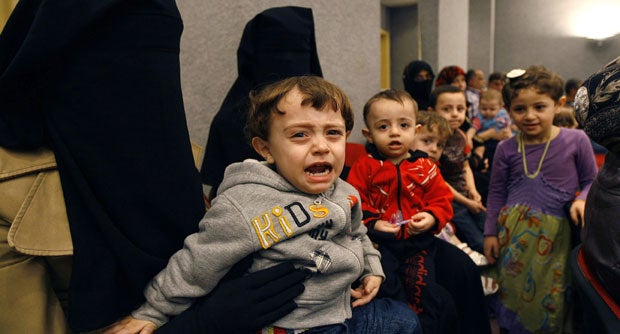 In this Thursday, Nov. 7, 2013 file photo, veiled Syrian women wait with their children for vaccinations against polio at one of the Syrian refugee camps in the southern port city of Sidon, Lebanon. An international charity organization Save Children has warned Monday, March 10, 2014 of a health care disaster in Syria with newborns dying in hospital incubators during power cuts and children having their limbs amputated for lack of alternative treatment. AP

BEIRUT—The number of Syrian children affected by the civil war in their homeland has doubled in the past year to at least 5.5 million — more than half the country’s children — with devastating effects on the health, education and psychological well-being of an entire generation, the United Nations children’s agency said Thursday.

The conflict, which enters its fourth year this month, has unleashed massive suffering across all segments of Syrian society, but the impact on children has been especially acute, according to a new report by United Nations Children’s Fund (UNICEF.)  Malnutrition and illness have stunted their growth; a lack of learning opportunities has derailed their education; and the bloody trauma of war has left deep psychological scars.

“After three years of conflict and turmoil, Syria is now one of the most dangerous places on earth to be a child,” the agency said. “In their thousands, children have lost lives and limbs, along with virtually every aspect of their childhood. They have lost classrooms and teachers, brothers and sisters, friends, caregivers, homes and stability.”

Since the conflict began, thousands of videos and photographs of bloodied babies, lifeless children and bombed out schools in Syria have provided stark images of the war’s impact on children. But in many ways, figures provide perhaps the clearest indication of how sweeping an effect the conflict has on their lives.

UNICEF said that more than 10,000 children have been killed in the violence, which would translate into the highest casualty rates recorded in any recent conflict in the region. Of those who have survived, thousands have been wounded, lost their home and schools, and seen family members and friends killed. That trauma has left around 2 million children in need of psychological support or treatment, the agency said.

Almost 3 million children are displaced inside Syria, while another 1.2 million have fled the country and now live as refugees in camps and overwhelmed neighboring communities where clean water, food and other basic items are scarce.

On the education front, UNICEF said that nearly half of Syria’s school-age children — 2.8 million and counting — cannot get an education because of the devastation and violence.

More than 2 million of those who should be in classes remain within Syria’s borders, as education and health services collapse and classrooms are bombed or used as shelters and military barracks. Another 300,000 Syrian children are out of school in Lebanon, along with some 93,000 in Jordan, 78,000 in Turkey, 26,000 in Iraq and 4,000 in Egypt, agency officials said in Geneva.

Many are forced to grow up fast: One in 10 refugee children is now working, the agency estimates, while one in five Syrian girls in Jordan is forced into early marriage. Inside Syria, boys as young as 12 have been recruited to help the rebels, some as fighters and others in a support role, the U.N. report said.

Syria’s conflict began in March 2011 with largely peaceful protests against President Bashar Assad. Facing a brutal government crackdown, protesters eventually took up arms and the country descended into a civil war that has killed more than 140,000 people so far.

Two rounds of peace talks in Switzerland early this year between Assad’s government and Syria’s main Western-backed political opposition group broke up without making any progress, and there are no immediate plans for another session.

On the ground, meanwhile, the fighting has shown no sign of slowing down.

On Tuesday, three suicide bombers blew themselves up in a local administration building in the Kurdish town of Qamishli in northeast Syria, killing at least five people, state media and a Kurdish official said.

The state news agency said the blasts at the Hadaya Hotel killed five people, but a Kurdish official at the scene said at least seven people died, including four women.

The hotel in the center of Qamishli has functioned as a municipality building, said Joan Mohammed, who spoke to The Associated Press by phone. The area has been the scene of heavy fighting recently between Kurdish gunmen and members of the al-Qaida breakaway group, the Islamic State of Iraq and the Levant.

Mohammed said several people wearing explosive belts and firearms shot dead the guards outside the building, walked in and hurled grenades before blowing themselves up. One of them was caught before he detonated his belt and was being questioned.

He said the dead included two employees and two visitors. He added that 15 people were wounded.

“The building is in the center of the town and is usually very crowded,” said Mohammad, adding that Kurdish fighters in the area were “on high alert” following the attack.

There was no immediate claim of responsibility, but suspicion immediately fell on the Islamic State of Iraq and the Levant. Militants from the group have been fighting Kurdish gunmen for months in northern Syria in battles that left hundreds of people dead.

Kurds have carved out their own territory in the country’s northeast, declaring their own civil administration in areas under their control amid the chaos of the civil war. But Kurdish militias continue to battle Islamic militant fighters in an offensive that has accelerated in recent months.

Kurds are the largest ethnic minority in Syria, making up more than 10 percent of the country’s 23 million people.