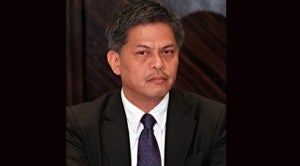 MANILA, Philippines—The thousands of students whose school records were lost to Super Typhoon Yolanda last November will graduate in the next few weeks, according to Education Secretary Armin Luistro.

Luistro said the teachers will try to reconstruct the students’ grades before Nov. 8 when Yolanda, the strongest typhoon to hit land, left entire provinces in the Visayas in ruins.

But if teachers can no longer recall the grades, Luistro said the students will still move up to the next grade or year level so long as they pass a “validation test” to see if they had mastered their lessons.

“All students affected by Yolanda will graduate. The loss of records will not be a problem,” Luistro said, adding that they have salvaged most of the records from ruined schools.

“In the extreme event, in case the teacher has forgotten, suffered amnesia, then as a last resort we can have the students go through a validating test,” he added.

Even students affected in the aftermath of the Zamboanga City siege last September will graduate in the coming weeks, Luistro said.

“Everybody will graduate. The schools have coping mechanisms,” he said.

At least 7,297 students in public elementary and high schools in Tacloban City, Ormoc City and in Eastern Samar and Leyte provinces lost their school records during the super typhoon.

DepEd said the partially damaged records were photo-captured and the digital files sent to the division offices for reconstruction in new forms.