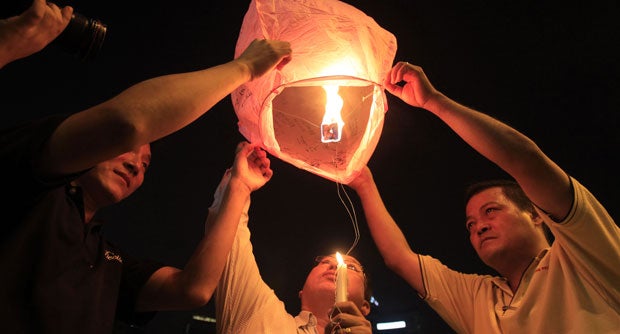 People prepare to release a sky lantern during a candlelight vigil for passengers aboard a missing Malaysia Airlines plane in Kuala Lumpur, Malaysia, Monday, March 10, 2014. The search operation for the missing Malaysia Airlines Flight MH370 which has involved 34 aircraft and 40 ships from several countries covering a 50-nautical mile radius from the point the plane vanished from radar screens between Malaysia and Vietnam continues after its disappearance since Saturday. AP

KUALA LUMPUR — Authorities hunting for the missing Malaysia Airlines jetliner expanded their search on land and sea Tuesday, reflecting the difficulties in locating traces of the plane more than three days after it vanished.

Malaysia Airlines said in a statement the western coast of the country, near the Straits of Malacca, was “now the focus” of the hunt. That is on the other side of peninsular Malaysia from where flight 370 was reported missing, meaning if the plane went down there it would have had to fly over the country, presumably undetected.

Civil aviation chief Azharuddin Abdul Rahman said the statement didn’t imply authorities believed the plane was off the western coast. “The search is on both sides,” he said.

The Boeing 777 had 239 people on board when it vanished off radar screens early Saturday morning en route to Beijing from Kuala Lumpur, triggering a massive international search effort.

Authorities began their hunt at the point the plane was last known to be, a spot in the seas between Malaysia and Vietnam. With no debris found, they have systematically expanded their search to include areas where the plane could have in theory ended up given the amount of fuel it had on board.

They have also said that the plane might have tried to turn back to Kuala Lumpur. On Sunday, Malaysia’s air force chief said there were indications on military radar that the jet may have done a U-turn.

Vietnamese planes and ships are a major component of the international search and rescue effort.

Lt. Gen. Vo Van Tuan, deputy chief of staff of Vietnamese People’s Army, said authorities on land had also been ordered to search for the plane, which could have crashed into mountains or uninhabited jungle. He said that military units near the border with Laos and Cambodia had been instructed to search their regions also.

“So far we have found no signs (of the plane) … so we must widen our search on land,” he said.