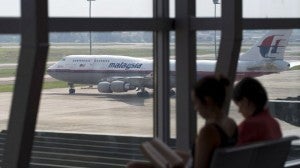 However, they cautioned against a rush to judgement, citing ongoing investigations and widespread disregard of international databases on stolen passports.

Flight MH370 disappeared over the waters between Malaysia and southern Vietnam early Saturday en route from Kuala Lumpur to Beijing. No traces of the plane have been confirmed found.

Malaysia has said it is looking at a possible terror motive in the plane’s disappearance after at least two people used stolen passports to pass security at Kuala Lumpur International Airport (KLIA).

“It’s rather surprising but it obviously raises a red flag,” said Chris de Lavigne, an aviation and defense analyst for consultancy Frost and Sullivan.

“We can’t look into this too much until further information is available, but it’s definitely a red flag,” he told AFP.

Malaysia has not been the target of any notable terror attacks in recent years, but it is home to several suspected key figures in militant Islamic groups such as the Al-Qaeda linked Jemaah Islamiyah.

KLIA is about one hour’s drive south of the capital Kuala Lumpur and has long been considered one of Southeast Asia’s top airports.

But Interpol, which maintains a database of stolen passports, said in a strongly worded statement that no one checked the database ahead of the Malaysian flight’s take-off.

“Whilst it is too soon to speculate about any connection between these stolen passports and the missing plane, it is clearly of great concern that any passenger was able to board an international flight using a stolen passport listed in Interpol’s databases,” its secretary general Ronald Noble said.

He said that despite Interpol pushing for years for immigration staff to check the database, “only a handful of countries worldwide are taking care to make sure that persons possessing stolen passports are not boarding international flights.”

“This is a situation we had hoped never to see,” he said, adding that last year passengers boarded planes more than a billion times without having their passports screened against the database.

The database was created in 2002 following the September 11, 2001, terrorist attacks.

Kuala Lumpur International Airport has had some minor security issues before.

Malaysia Airlines was fined in 2012 for allowing a Malaysian to board a flight from Kuala Lumpur to Auckland despite a directive from New Zealand officials not to check the passenger in.

The airline’s check-in attendant circumvented the system by changing the passenger’s passport number, leading to the NZ$5,500 ($4,650) fine by a court in New Zealand.

In 2007, a Palestinian stowaway hid in the nose wheel well of a plane, leaving Malaysian authorities puzzled how he breached airport ground security to reach neighbouring Singapore without being spotted.

Malaysian authorities, left red-faced by the recent apparent security breach, have also raised questions, and immigration has launched an internal probe on the officers who did not detect the false passports.

“I am still puzzled how come (immigration officers) cannot think: an Italian and Austrian but with Asian facial features,” Home Minister Zahid Hamidi said, according to national news agency Bernama.

Prime Minister Najib Razak has said authorities would review “all security protocols” and enhance them “if needed”.

Kumar Ramakrishna, a security expert at Singapore’s S. Rajaratnam School of International Studies, said it should be easy for authorities to quickly access Interpol’s database.

“It may not be fair to finger the whole system in place there (at Kuala Lumpur International Airport),” he said.

“The key thing is that countries should make it a point to be electronically linked to the Interpol database — as an added and important layer in the range of border controls to detect false travel documentation used by drug mules or terrorists.”

Shukor Yusof, aviation analyst with Standard & Poor’s, has said the sheer volume of travellers moving through airports likely means not all forgeries can be caught, and stolen passports do not necessarily equate to terrorism.

“To blame Malaysian authorities for this is probably unfair — they have to get it right all the time and potential hijackers just have to get through once,” he said.

RELATED STORIES
How can jet disappear? In the ocean, it’s not hard

Malaysia not ruling out mid-air explosion theory on missing flight