TOKYO—Japan on Tuesday marks the third anniversary of the quake-tsunami disaster which swept away 18,000 victims, destroyed coastal communities, and sparked a nuclear emergency that forced a re-think on atomic power.

Remembrance ceremonies will be held in towns and cities around the disaster zone and in the capital Tokyo, where Emperor Akihito and Empress Michiko are to lead tributes to those who lost their lives in Japan’s worst peace-time disaster.

Many local governments will switch on a tsunami alarm siren at 2:46 pm (0546 GMT), marking the exact moment a 9.0-magnitude undersea quake hit.

Its raw force unleashed a towering tsunami that travelled at the speed of a jet plane to the coast. Within minutes, communities were turned to matchwood, and whole families had drowned.

Waves also crashed into the Fukushima nuclear plant, sparking reactor meltdowns and explosions, and setting off the worst atomic crisis in a generation.

The crippled plant remains volatile and experts say the complicated decommissioning process will take decades, as fears persist over the long-term health effects of leaked radiation. The accident forced tens of thousands to flee from areas around the shattered site.

Although no one died as a direct result of Fukushima, about 1,650 area residents died from complications related to stress and other problems following the accident.

A total of 15,884 people are confirmed to have died in the tsunami with another 2,636 unaccounted for. Searchers still find human remains.

Despite the government pledging billions of dollars in reconstruction aid, progress in disaster-hit regions has been slow, and thousands of disaster refugees struggle to cope.

Among almost 270,000 evacuees from the tsunami and Fukushima, about 100,000 are in temporary housing while others found shelter in new cities or with relatives.

Japan has so far built only 3.5 percent of the new homes promised to disaster refugees in heavily affected Iwate and Miyagi prefectures.

That has sowed doubt among many people, with some 77 percent of Japanese saying the pace of reconstruction has fallen short, according to a poll conducted by Kyodo News and other media organisations in March. 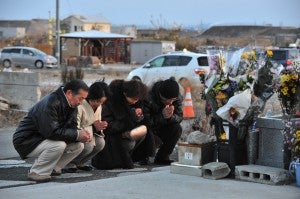 People pray for tsunami victims at a cenotaph in the coastal area of Arahama district in Sendai, Miyagi Prefecture on March 11, 2014, the third anniversary of the 2011 earthquake and Tsunami disaster. Japan marked the third anniversary of the quake-tsunami disaster, which swept away 18,000 victims, destroyed coastal communities, and sparked a nuclear emergency that forced a re-think on atomic power. AFP

On Monday, Prime Minister Shinzo Abe, who swept to power in late 2012, said Tokyo was only “halfway” done.

“I’m determined to accelerate the recovery and not let this disaster fade from memory,” he told parliament.

“Japan’s revival won’t come without the restoration of devastated areas.”

Fierce anti-nuclear sentiment may have subsided, but it still poses a challenge to Abe’s bid to breathe life into Japan’s long-tepid economy.

On Sunday, tens of thousands of citizens staged an anti-nuclear rally in Tokyo ahead of the anniversary, voicing anger at the premier’s plan to switch on shuttered nuclear reactors, which once supplied more than a quarter of the resource-poor nation’s power.

Abe repeated his view Monday that reactors which can be deemed safe would be turned back on. All of Japan’s reactors were switched off after the accident.

But Abe, who said he regularly eats rice grown in the Fukushima region, added in a press briefing that “having experienced the accident, it’s only natural for people to be concerned about the safety of nuclear plants”.

Tsunami fails to stop newspaper even if it’s 1 page, handwritten