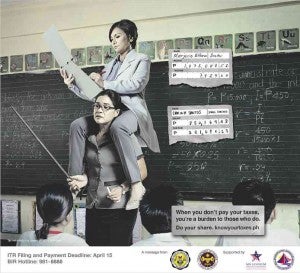 MANILA, Philippines—A Catholic priest on Monday called “unchristian” the Bureau of Internal Revenue’s (BIR) shame campaign against tax evaders that focused on doctors, saying there was a more dignified way to ensure that members of the medical profession paid the correct taxes.

In an interview with reporters, Fr. Edu Gariguez, executive secretary of the Catholic Bishops Conference of the Philippines National Secretariat for Social Action (CBCP-Nassa), said that while it was true that many doctors didn’t pay the right taxes, it was not proper to generalize them as tax cheats.

“There are doctors who don’t pay taxes correctly. But the problem with the ad is that it made a generalization… It is not fair to those who are honest about their taxes,” said Gariguez, adding that there were also others employed in various professions who did not pay the proper taxes.

“Some lawyers and even giant corporations are guilty of this, not just some doctors,” he said.

He said the BIR should have exhausted other means first to call the attention of doctors before resorting to a shame campaign.

“To humiliate them through that kind of advertisement is very unchristian. Although there is some truth to it, I would have hoped [the BIR] addressed the issue first in a more dignified way,” said Gariguez.

Last week, the Philippine Medical Association (PMA) cried foul over a BIR ad that appeared in the Inquirer showing a doctor carrying a teacher on her shoulders.

But Gariguez said the print ad should serve as a warning to doctors to pay their taxes accurately. “On the other hand, [the ad] is a wake-up call to the medical profession to police their ranks,” said the priest.

PMA president Dr. Leo Olarte has stressed the organization will not tolerate tax cheats among its ranks and it will act immediately if such cases were brought to its attention.—Jocelyn R. Uy