One batch of Nagaraya nuts recalled for fungal toxin–FDA 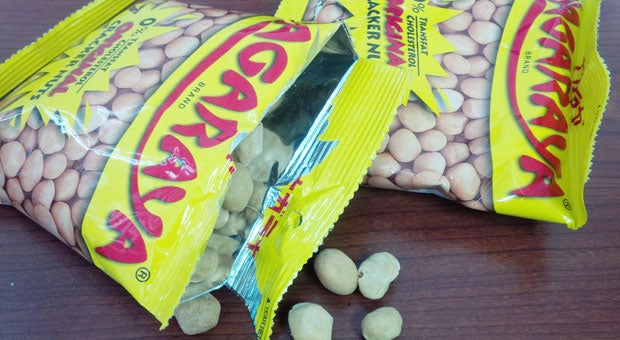 MANILA, Philippines – The Food and Drugs Administration (FDA) said the manufacturer of Nagaraya Cracker Nut Original Butter Flavor (160 grams) recalled one batch of the product for supposedly containing an “unacceptable” level of aflatoxin.

According to the US Center for Disease Control and Prevention, aflatoxin is a “fungal toxin that commonly contaminates maize and other types of crops during production, harvest, storage or processing.”

“Exposure to aflatoxin is known to cause both chronic and acute hepatocellular injury. In Kenya, acute aflatoxin poisoning results in liver failure and death in up to 40 percent of cases,” the center said.

The FDA cautioned consumers to contact the Sales Department of Food Industries Inc. at 810-0141. The public may also send their queries and other concerns to FDA’s official e-mail address, [email protected]

The FDA is also conducting monitoring of all peanut-based products to check on other cases of aflatoxin contamination.

Reached for comments, Virgilio Sunga, sales manager in Food Industries Inc. which manufactures Nagaraya, said their products were not processed with toxic chemicals.

He told INQUIRER.net that the aflatoxin is a dormant component in peanut that is produced by molds when exposed to excess heat.

“(Aflatoxin) is dormant in a peanut body that grows when exposed to heat,” Sunga said in Filipino.

He added that the company voluntarily pulled out the batch from the market.