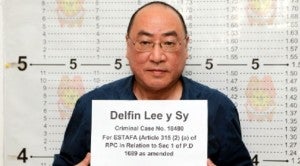 MANILA, Philippines–The camp of Delfin Lee on Monday filed a petition for habeas corpus with the Court of Appeals to ask for his immediate release.

Lee, a fugitive for more than two years, was arrested last week in Manila. An arrest warrant was issued against him by a Pampanga court in connection with the P6-billion housing scam that used Pag-Ibig funds.

The petition insisted that the arrest was illegal considering that the appeals court had already ordered the Pampanga court to recall the arrest warrant.

Lee, through his lawyer, said the ruling of the Court of Appeals is immediately executory.

He added that the continued detention of Lee is a violation of his client’s constitutional right to liberty.
“The detention of herein petitioner by the National Bureau of Investigation Regional Office III is patently illegal,” the petition stated.