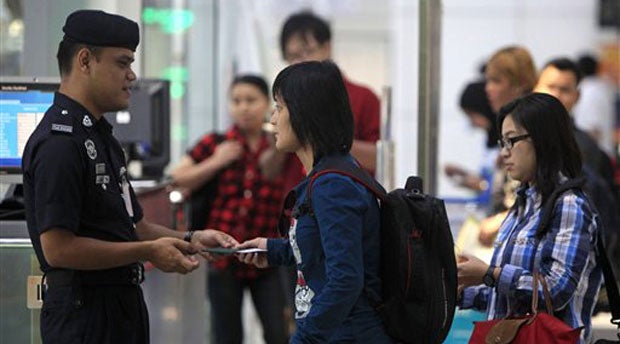 BANGKOK – Thai police said Sunday they were investigating a “passport ring” as details emerged of bookings made in Thailand with stolen European passports for the vanished Malaysia Airlines flight.

Two European names – Christian Kozel, an Austrian, and Luigi Maraldi of Italy – were listed on the passenger manifest of the flight MH370, but neither man boarded the plane, officials said.

Both had their passports stolen in Thailand over the past two years.

Malaysia has launched a terror probe investigating the suspect passengers and the United States has sent in the FBI to assist.

Flight information seen by AFP shows that tickets were booked in Maraldi and Kozel’s names on March 6, 2014, and issued in the Thai city of Pattaya, a popular beach resort south of the capital Bangkok.

The e-ticket numbers for their flights are consecutive and both were paid for in Thai baht. Each ticket cost THB 20,215 (US$625).

Kozel was booked to travel from Kuala Lumpur to Beijing on the Malaysia Airlines Boeing 777, then on to Amsterdam and Frankfurt while Maraldi was booked on the same flights until Amsterdam, where he was to continue to Copenhagen.

Interpol confirmed that “at least two passports” recorded in its Stolen and Lost Travel Documents (SLTD) database were used by passengers on board the flight, which was carrying 239 people.

“The Austrian and Italian passports were added to Interpol’s SLTD database after their theft in Thailand in 2012 and 2013 respectively,” it said in a statement. “Interpol is also conducting checks on all other passports used to board flight MH370 which may have been reported stolen.”

A senior Thai police official told AFP that authorities were probing a passport racket on the resort island of Phuket, where Maraldi’s passport was stolen.

“A police team combined with local police and immigration are working to track down a passport ring,” southern police commander Panya Mamen said.

A district official in Phuket said that Maraldi had presented himself to police there on Sunday.

“An Italian tourist, Luigi Maraldi, has met (the) southern police commander today in Phuket to say he was not on the plane and his passport had been stolen since last year,” district police lieutenant colonel Akanit Danpitaksart told AFP.

He said they had no information on Kozel’s passport but Austrian foreign ministry spokesman, Martin Weiss, said Sunday that it had been stolen on a flight from Phuket to Bangkok.

‘Too soon to speculate’

The Interpol statement said no checks of the stolen Austrian and Italian passports were made by any country between the time they were entered into Interpol’s database and the departure of the flight.

“Whilst it is too soon to speculate about any connection between these stolen passports and the missing plane, it is clearly of great concern that any passenger was able to board an international flight using a stolen passport listed in Interpol’s databases,” said secretary general Ronald Noble.

“This is a situation we had hoped never to see,” he added. “For years Interpol has asked why should countries wait for a tragedy to put prudent security measures in place at borders and boarding gates.”

Last year, passengers were able to board planes more than a billion times without having their passports screened against Interpol’s databases. The SLTD database, created after the 9/11 attacks in the United States in 2001, now has more than 40 million entries.