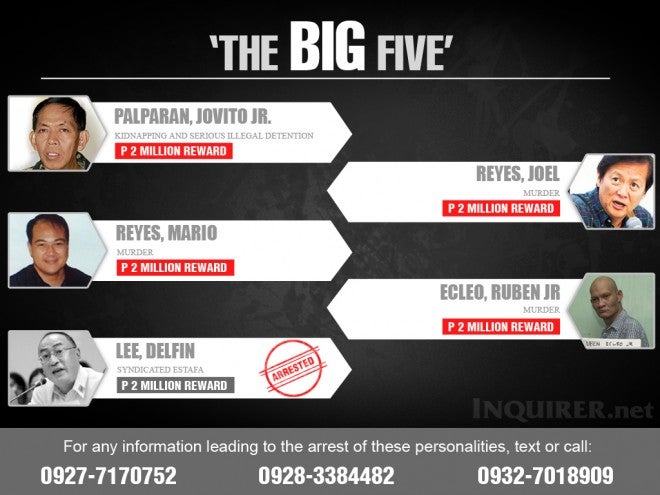 MANILA, Philippines—One down, four to go.

The Philippine National Police on Sunday expressed confidence that the remaining four of the “Big 5” high-profile fugitives would soon end up behind bars following last week’s arrest of real estate magnate Delfin Lee.

“The PNP is employing maximum efforts to locate the four other fugitives. The arrest of Delfin Lee is a positive development (toward that goal),” said Senior Supt. Wilben Mayor, spokesman of PNP Director General Alan Purisima.

“Although it may take some time, definitely the long arms of the law would catch up with them. That’s the principle we apply in running after fugitives,” he told the Inquirer over the phone.

Lee, tagged as the architect of a P7-billion housing scam, was arrested by members of Task Force Tugis at the lobby of Hyatt Regency Hotel and Casino in Ermita, Manila, on March 6, nearly two years after a Pampanga court ordered his arrest for syndicated estafa.

Mayor said the task force, which Purisima created in August 2013 to hunt down prominent wanted personalities, had intensified its operations to find the four high-profile fugitives and “deliver justice to their victims.”

He urged the four to turn themselves in and help the PNP save public funds in locating them.

Lee’s lawyers said they would challenge the legality of their client’s arrest as they maintained that the Court of Appeals had ruled that the judge who issued the arrest warrant against the owner and founder of Globe Asiatique Realty Holdings Corp. had committed grave abuse of discretion.

Lawyer Willy Rivera said he would file Monday a petition for a writ of habeas corpus in the appellate court seeking Lee’s immediate release from the detention cell of the National Bureau of Investigation in San Fernando City, Pampanga.

Rivera questioned the validity of the commitment order issued by Executive Judge Edgar Chua of the Pampanga Regional Trial Court, saying the judge ordered Lee’s detention despite questions about the legality of his client’s arrest.

“We are seeking this relief to protect our client from these illegal moves and proceedings, including his scheduled arraignment (today),” Rivera said in a statement.

Rivera claimed that the PNP Criminal Investigation and Detection Group (CIDG) issued a certification on Nov. 20, 2013, removing Lee’s name from its wanted list.

“[E]ven … Purisima has acknowledged and recognized the decision of the CA Special 15th Division in a letter to (my) law office dated Jan. 8, 2014,” Rivera said.