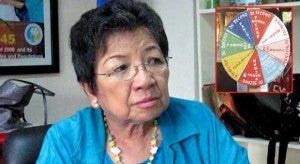 MANILA, Philippines – A mayor in Tanauan, Batangas who forced a man to walk in public with a sign saying he stole fish was denounced by the government’s rights body Wednesday amid online outrage.

In a clip shown by local ABS-CBN television and uploaded on the video sharing site YouTube, the unidentified man had his hands bound behind his back with a bag of dried fish hanging from the knot, and a poster stating “I am a thief” taped to his shirt front.

A group of men identified by the network as local government security personnel laughed and taunted the bound man, forcing him to kneel in front of a fishmonger to ask for her forgiveness.

“While he was not physically harmed, he was treated with indignity and psychologically punished,” she added.

“Only the court can determine guilt and punishment. There was no due process.”

Rosales said Mayor Thony Halili should be investigated for abuse of power for his role in allegedly ordering the “shame campaign.”

It was unclear when the clip was made. The mayor could not be reached for comment by AFP on Wednesday.

But he told another Manila television network, GMA, in an interview that he had ordered the public shaming.

“He is a recidivist. I had no other way of making him stop other than shaming him,” Halili added.

The controversy came just days after the United States criticized the Philippines for failing to curb human rights abuses, which it said included extrajudicial killings and widespread abuse of power and corruption.

Rosales demanded that the video be taken down from the mayor’s official Facebook page. By Wednesday, it had been shared over 1,000 times.

“He had been under surveillance for some time,” the Facebook message on the video link said.

“This type of barbarity still with us? A shame,” said a user identified as Cat Black. Other commenters accused the government of singling out petty criminals, while turning a blind eye to corrupt officials.

While the Philippines is one of Asia’s freest democracies, rights groups say it is afflicted by a “culture of impunity” where officials believe they can commit abuses and get away with it.

This has led to rampant killings of journalists and activists, as well as the routine execution of petty criminals.