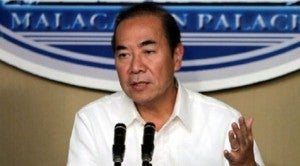 MANILA, Philippines—Former President Gloria Macapagal-Arroyo’s congressional allies, including at least three who are now key allies of President Aquino, spent a total of P10.6 billion on their pet public works projects and P3.9 billion to augment their pork barrel allotments during the last six months of her administration.

This was confirmed by Public Works Secretary Rogelio Singson in his testimony before the House committee on good government and accountability that is conducting a probe on how the P69.7-billion congressional insertions—of which P30 billion went to the Department of Public Works and Highways (DPWH)—in Arroyo’s last budget year (2010) were spent.

Singson said only P10.6 billion of the P30 billion was disbursed as of Arroyo’s last day in office, June 30, 2010, but the way the funds were used up “to the last peso”  strongly indicated, he said, that the road repairs, dredgings, bridges and schools did not go through the bidding process.

“Whatever was allocated was used up to the last peso. If they were bid out properly, the project cost should have been lower than the budget cost,” he said.

Singson said the DPWH could not establish whether these were “ghost projects” because “I cannot possibly check all of them, we are just looking at the big-ticket items.”

He has left it to the Commission on Audit to determine if these DPWH projects were implemented properly. The House committee has summoned several of the contractors involved to its next hearing.

“At this point there are suspicions, but nothing has been established yet,” said Singson, who stressed that the DPWH could not blacklist contractors on mere suspicion.

But Singson revealed that the DPWH was close to wrapping up its investigation of one of the biggest contractors involved in the suspected scam—JSG Construction and E. Gardiola Construction owned by Edwin and Judy Gardiola.

Singson said that most of the special allocation release orders (Saro) were given directly to the DPWH district offices without the knowledge of the central office.

Singson said these anomalies led him to adopt reforms in farming out DPWH projects such as stopping direct releases to offices, stopping the submission of letters of intent from bidders (which allows syndicates to determine in advance the auction participants) and discontinuing the use of credit line certifications from banks as a basis for determining the capacity of bidders, which Singson said had allowed fly-by-night contractors to bid for big contracts.

Tañada, Alcala and Neptali Gonzales are closely allied with the Aquino administration. Tañada is the spokesman of the ruling Liberal Party, Alcala is agriculture secretary while Gonzales continues to be the Mandaluyong congressional representative.