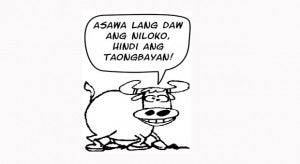 MANILA, Philippines—The woman who stood quietly behind him all these years has come out and dropped her own bombshell against Sen. Juan Ponce Enrile: She still loves him.

Speaking in an exclusive television interview on Monday night, Cristina Ponce Enrile spoke of her long struggle with her husband’s alleged womanizing in their 56-year marriage, confirming that she once left for the United States to seek a divorce.

Cristina said the last straw was Jessica Lucila “Gigi” Reyes, Enrile’s former chief of staff who, like the 90-year-old senator, was also implicated in the alleged P10-billion pork barrel scam.

“Yes, it is true,” Cristina admitted in Winnie Monsod’s “Bawal ang Pasaway” program on GMA News when asked if Reyes was the reason she wanted to leave Enrile that time.

“Because I had heard that she was already too long ‘coz he [had] had many girls before Gigi, many girls. But they [did] not last too long, [but] with Gigi, it lasted long,” she recalled.

“Somebody told me that it’s not only this time. It’s more years than you don’t know [about]. So that’s what got me.”

Still, the wife came to the husband’s defense in the face of allegations that he channeled huge portions of his Priority Development Assistance Fund (PDAF) to bogus organizations put up by Janet Lim-Napoles.

Just as convinced was Cristina that her husband had nothing to do with smuggling in Cagayan, a running allegation in Enrile’s political base.

“No, no, that I can vouch for it,” she said, recalling one meeting where Enrile supposedly told those in attendance: “I don’t want to know that anybody tries to smuggle anything, even toothpick.”

Of all the women involved with Enrile—Cristina counted 38 affairs—it was only Reyes that prompted her to fly to the United States and seek divorce. She said she eventually reconsidered after Enrile told her, “Over my dead body.”

Cristina said she had met Reyes “only one time,” but preferred not to go into details, other than that she saw the ex-chief of staff in the other house in the compound where Enrile was staying.

“It was not nice,” she told Monsod, who then asked, “And you gave it to her?”

“Oh yes,” she replied. “I decided, alsa balutan [time to pack my bags] and try to get a divorce.”

By her own admission, Cristina was not one to take her husband’s womanizing lightly, at least early in their marriage. She said he began fooling around “after about six months after my first child.”

Cristina admitted that she once stormed the house of an alleged Enrile mistress and fired at the gate. Next stop was Enrile’s office where she made a mess.

“It’s like a roller-coaster,” she said, referring to her long marriage with Enrile. “He’s not a palikero [playboy]. The women are the ones who [offered themselves to him].”

“Would he bite?” Monsod asked. “Oh, definitely,” she replied, recalling how Enrile would supposedly ogle girls whenever they had dinner outside, say, in a hotel lobby.

“When he looks around like that and follows the girl, I tell myself, “Uh-oh, and I’m correct.”

When she returned home after a failed attempt to divorce Enrile, she said he and Reyes “lay low” for a while. “I don’t think it’s an affair anymore. I think it’s a necessity …” she said.

Asked if she still loved her husband, she said: “I think the word is an affection that I have because he’s the father of my children and I respect him for that.”