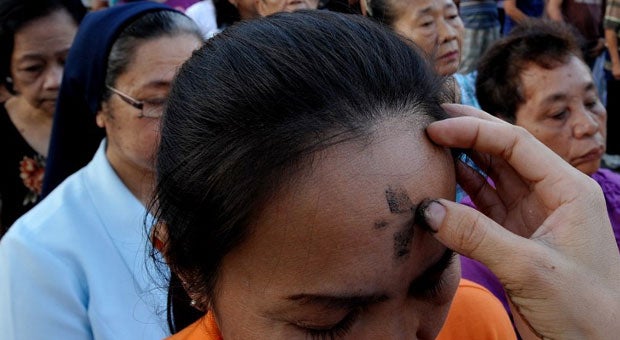 Remember that you are dust and unto dust you shall return. AFP FILE PHOTO

MANILA, Philippines—A Church official on Tuesday reminded the Catholic faithful to fast and to abstain as the Christian world on March 5 marks Ash Wednesday, which signals the start of the Lenten season.

The priest or a lay minister will apply ashes in the form of a cross on the forehead of each Church member while saying, “Repent and believe in the Gospel,” or, “Remember that you are dust and unto dust you shall return.”

“With that dirt on your forehead, you declare to everybody that you are no different from the others who need to be converted,” said Fr. Genaro Diwa, executive secretary of the Catholic Bishops’ Conference of the Philippines (CBCP) Episcopal Commission on Liturgy.

According to Diwa, the observance of Ash Wednesday is very significant because it is during this time that the faithful admit they are now ready to repair whatever damage they have done in their relationship with God and with others.

“The ashes (from the burned palm fronds) of Palm Sunday signify or symbolize the desire of Christians to follow Christ,” Diwa told reporters.

He said that apart from desiring renewal, the faithful should also fast and abstain.

But Diwa said the faithful should not just avoid eating meat but also abstain from their passions and desires.

“Fasting declares that even if you need food, which is a human need, there is something even greater than food and that is God,” he said.

Those who choose to perform corporal works of mercy instead of fasting or engaging in abstinence may do so, he added.

“If you decide not to abstain during that Friday, it must be replaced by a certain kind of corporal act of mercy, such as giving alms [or] doing something good,” said Diwa, who is also the minister of the Liturgical

Affairs of the Archdiocese of Manila.

“There are many things that we do during the Lenten season. We hope that all these activities will help us to be strengthened in our renewal of our baptismal vows,” he said.

In his Lenten message, Lingayen-Dagupan Archbishop Socrates Villegas, CBCP president, focused on the beatitude of poverty, emphasizing that it teaches sensitivity and proper ways to respond to the poor.

According to Villegas, all are called to practice poverty in its material, moral and spiritual aspects.

Material poverty that humanizes and sanctifies is experienced in simplicity of life and works of mercy and justice, he said.

Moral poverty, according to him, can be exercised by strengthening one’s resolve to practice solidarity with the neglected, and to denounce injustice.

“Catholics should embrace spiritual poverty by ‘deepening our rootedness’ in Christ, whose poverty alone enriches us,” Villegas said.

The CBCP head called on the faithful to oppose and confront “dehumanizing” poverty by taking steps to alleviate it.

“This Lenten season, Christ invites all, but especially the laity, to oppose degrading and dehumanizing poverty and embrace humanizing and sanctifying poverty,” Villegas said.

“In other words, he invites us to imitate His example. We fight poverty with poverty only because Christ has shown us the way,” he stressed.