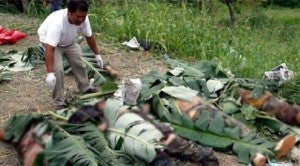 MANILA, Philippines–Government prosecutors have already rested its case on the 28 accused in the Maguindanao massacre trial.

Included in the 28 where the prosecutors have rested their case are: Datu Andal “Unsay” Ampatuan Jr. and Chief Inspector Sukarno Dicay.

With this, it will now be the defense’s turn to present evidence.

In a manifestation to the Quezon City Regional Trial Court to which the Supreme Court was furnished, the prosecutors led by Taguig Chief Prosecutor Archimedes Manabat said they still have to wait for the resolution of pending petitions before the Court of Appeals regarding their evidence against the 76 other accused.

These pending petitions include a petition for certiorari questioning the inclusion of accused Sukarno Badal from the list of accused and the petition filed by the prosecutors questioning the court’s denial of bid to make police Inspector Rex Ariel Diongon and several others as state witness.

“The prosecution, despite disinterest to further present witnesses, is in no position to terminate its evidence presentation and rest its cases against the remaining 76 accused but has to await the final order by this honorable court and the appellate court,” the prosecutors said.

The Maguindanao massacre is known to be among the biggest media killing case in the country with 32 our 58 people killed are journalist.