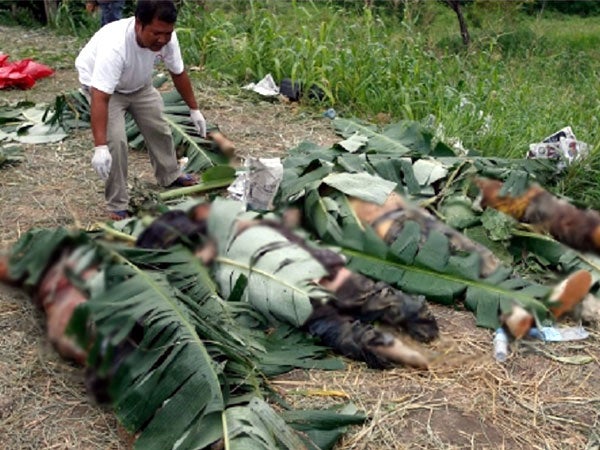 Lamenting how the trial has dragged on, the families of 58 people slaughtered in the country’s worst election-related violence are turning to the United Nations to exact compensation from the government.

After more than 100 hearings since the trial began in early 2010, the families of the victims said they were nowhere closer to the resolution of the Nov. 23, 2009, Maguindanao massacre.

While 104—including eight principal accused from the Ampatuan clan—had been arraigned, at least 88 of their coaccused remain at large. And state prosecutors have yet to wrap up the presentation of evidence, private lawyers said.

Given the snail’s pace of the trial, Noemi Parcon said it might take “16 to 20 years,” or well beyond the term of President Aquino, before the case is decided.

“We have no choice but wait,” the 49-year-old widow of one of the 32 murdered media workers said in an interview on Thursday afternoon. “We can’t force the government to speed it up.”

But like some of the victims’ relatives, Parcon has started to lose hope of getting justice on Mr. Aquino’s watch.  “[At this] pace, there’s little hope we can get justice within six years,” she said.

The relatives appealed to Justice Secretary Leila de Lima to speed up the prosecution of the accused so the case could be decided by the time Mr. Aquino steps down in June 2016.

Friday morning, on the eve of the fourth anniversary of the massacre, they offered prayers for the victims in a Mass celebrated by Fr. Robert Reyes at the University of the Philippines (UP) College of Law in Quezon City.

Erlyn Umpad sobbed as she and the others approached the altar, clutching blown-up pictures of their dead relatives, during the offertory.

“Please guide our son as he grows up,” she sobbed, addressing her late husband, UNTV cameraman McDelbert Arriola. She later said she hoped the case would be resolved soon because she loathed the idea of their son growing old enough to attend the trial.

She said her husband and their newly born baby spent only more than a dozen days together before he met his brutal end.

The victims’ families later filed a communication with the UN Human Rights Committee (UNHRC) by e-mailing it to [email protected] from a laptop in the same room where they heard Mass.

In that unprecedented filing, they asked the UN body to persuade the Philippine government to compensate each of them for the deaths of the family “breadwinners” in violation of their rights.

“We’ve been rebuffed by the Philippine government, so we decided to go to the United Nations,” said Parcon, widow of Koronadal City-based journalist Joel Parcon.

Their lawyer, Harry Roque, invoked the International Covenant on Civil and Political Rights (ICCPR) to demand reparation from the state for the violation of the victims’ right to life. He said this was an “exercise of a right.”

Since the trial of the accused is going on, the victims could not demand that the state provide an “adequate domestic remedy,” he said in his office at the UP Law Center on Thursday afternoon.

But given Malacañang’s “unequivocal” objection to paying compensation because the crime happened on another President’s watch, Roque said the relatives were left with no choice but to go to the UNHRC.

“We’re not asking for a figure. Under international law, the figure should be sufficient to extinguish all the consequences of the illegal act,” he said. Some of the victims mentioned P2 million.

“If the government could pay Hong Kong nationals who were killed in the 2010 hostage-taking in Luneta, how much more us? They have a bigger responsibility to us,” Parcon said.

“The President and our lawmakers should try to understand us,” she said.

Rommel Bagares, another lawyer for the relatives, said the Philippines was a party to the ICCPR’s Optional Protocol, which provides that ordinary citizens could file a complaint in the United Nations for the violation of their rights.

There has been a precedent.

Roque, Bagares and the rest of the members of their nongovernment organization, Center for International Law, have been inspired by the UNHRC’s favorable resolution of the libel case filed against Davao City broadcaster Alex Adonis by former Speaker Prospero Nograles.

The UNHRC said in October 2011 that the Philippine libel laws were incompatible with freedom of expression.

Today, the families are also filing online communications with the UN Special Rapporteurs on the Protection of Freedom of Expression, on Extrajudicial Killings and on Reparations to look into the case of the slain journalists, lawyer Gilbert Andres said.

It may take years before the UNHRC could resolve the complaint, but given the dire straits the relatives are in, it’s better than nothing. Some of them were given livelihood funds by the Aquino administration but the money could only go so far.

“Yes, he was very helpful at the start,” Editha Tiamzon said, referring to Mr. Aquino. “But what we need is financial help for the long haul because our children are still in school.” She has three children, aged 13, 18 and 19.

The victims’ families have not heard from Mr. Aquino in a long time; not in his speeches, not in his July 2013 State of the Nation Address. Three years into his presidency, they feel they’ve been “forgotten.”

“We’ve made several requests, but these weren’t granted. It’s been only three years, and yet we’ve been forgotten,” said Tiamzon, 52, widow of UNTV cameraman Daniel Tiamzon.

The 58 victims, including 32 media workers, were riding in a convoy of cars to Shariff Aguak town, capital of Maguindanao province, when they were stopped allegedly by followers of the Ampatuan clan, including policemen and soldiers, in Ampatuan town.

Then Buluan Vice Mayor Esmael Mangudadatu sent his wife and female family members to file his certificate of candidacy for governor to run against a member of the Ampatuan clan in the following year’s elections. Journalists rode with them to cover the unprecedented challenge to the Ampatuans’ political monopoly.

They were shot and buried in a pit excavated with a backhoe on a hilltop overlooking the highway.

The Ampatuans had long held sway in local politics in the Autonomous Region in Muslim Mindanao. They were allies of then President Gloria Macapagal-Arroyo, delivering votes for her when she ran for the presidency in 2004.

The Ampatuans, led by Andal Sr. and Andal Jr., were arrested and eventually indicted for the crime.

Alejandro Reblando Jr., 32, son of Manila Bulletin reporter Alejandro “Bong” Reblando, said he was still holding on to Mr. Aquino’s promise that justice would be served on his watch.

“That’s our only hope,” Reblando said.

Roque doubted the case would be resolved within the next three years but said he  hoped this year’s commemoration would “bring about enough shame to prompt them (the courts) to act.”

He partly blamed the judicial system for the delay. He said they moved for a partial promulgation of cases against the accused who had been tried under the principle of “first in, first out,” but this was junked by the local court.

He said it was now up to the Supreme Court to “hasten” the resolution of the case. He said he believed Chief Justice Maria Lourdes Sereno was monitoring the trial, but “it isn’t enough to monitor.”

“I’m hoping to shame them into doing something so that [in] the fifth year we can say there’s been tremendous development, compared with the fourth year,” he said. “[Maintaining the] status quo is unacceptable.”

The private lawyers had been hoping that the state prosecutors would rest their case this year to make way for the presentation by the defense. And this would just involve the 101 accused. Trying the 88 accused who are still at large is another matter.

“When do they intend to arrest the 88?” Roque said.

In the face of challenges, the widows, children and siblings of the murdered media workers find solace in the support of Roque and other lawyers of the Center for International Law, as well as of the press.

“The fact that our lawyers aren’t giving up on us gives us so much hope,” Tiamzon said. “And of course the media are giving us so much hope. You’re the one airing our grievances to the government.”

In Ampatuan, Justice Now Movement (JNM), the organization of the slain media workers’ families, marked the fourth anniversary of the massacre on Thursday with its members bewailing the slow pace of the case.

But Grace Morales, secretary general of JNM, said the families of the murdered media workers remained united and determined to press the case until justice was served.

Morales said the families were so unhappy because four years since the trial began, not one of the perpetrators had been convicted and the trial was dragging on with no clear end in sight.

“It’s as if the government did not care,” Morales said.

The families of the victims believe justice will come faster if the government sincerely presses the prosecution of the perpetrators, she said.

Jessie Casalda, president of the Davao chapter of National Union of Journalists of the Philippines, observed that the public was “almost losing interest in the case,” a lamentable situation that has been worsened by a ban on TV coverage of the trial.

Casalda said he suspected that the slowness of the trial was deliberate.

“They want to remove the issue from the public eye so that the people will eventually lose interest in it,” he said.

Carlos Conde of New York-based Human Rights Watch said that even in jail, members of the Ampatuan clan continue to exert pressure on witnesses to force them to withdraw.

“They came again last month, showing our pictures to my relatives, letting them know that they’re watching us,” Conde said, quoting what witness Bong Andal had told him in an interview.

Andal was the backhoe operator who helped bury the victims.

In his affidavit, Andal said he witnessed the shooting of several victims by members of the Ampatuan militia.

“But the problem of the Maguindanao massacre is more than a failure of the judicial process. It is about whether those threatening Bong Andal rather than the authorities control the proceedings,” Conde said. With reports from Richel Umel, Germelina Lacorte and Allan Nawal, Inquirer Mindanao

Read Next
Judge: Trial ‘almost halfway through…’
EDITORS' PICK
BREAKING: 1,075 people in PH has coronavirus disease – DOH
Style and music journeys with Claudia Barretto
DILG to stranded workers: ‘Stay where you are’ until Luzon-wide quarantine is over
Cebu City closes its borders
IATF: Food firms to operate with 50% of workforce during Luzon quarantine
UP-PGH wards for COVID-19 patients finished in 5 days
MOST READ
Pacquiao to seek probe on leaked private letter from Barangay Dasmariñas
Tootsy Angara bares neighbor wanted them out of village
BREAKING: 1,075 people in PH have coronavirus disease – DOH
All 3 COVID-19 positive patients in Bicol sent home
Don't miss out on the latest news and information.