Search is on for next PH navy, air force chiefs 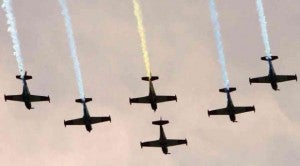 Members of the Philippine Air Force Flying School use several SF-260FH aircraft in an aerobatic demonstration during the PAF’s 66th anniversary celebration held at Clark Air Base, Pampanga, on Monday. The old Philippine Air Force had the famous aerobatic Blue Diamond squadron from the 1950s to the ’80s. LYN RILLON

MANILA, Philippines—The search is on for the Philippine military’s next Navy and Air Force chiefs.

The Board of Generals is now “discussing” the selection of the next Commanding General of the Philippine Air Force and Flag Officer in Command of the Philippine Navy, Major General Domingo Tutaan Jr., spokesperson of the military said on Tuesday.

One of the leading contenders for the top Air Force post is Major General Jeffrey Delgado (Philippine Military Academy Class of 1982), deputy chief of staff for plans. During the presidency of President Benigno Aquino III’s mother, he was assigned with the Presidential Security Group.

The list of candidates will be passed to Defense Secretary Voltaire Gazmin, then Aquino will pick his choice.

Tutaan assured that the selection will be fair.

“The Board of Generals will definitely look into and deliberate as far as who the recommendees will be,” Tutaan said.

PAF going back to supersonic age with South Korean jets

Another New Year, another AFP chief