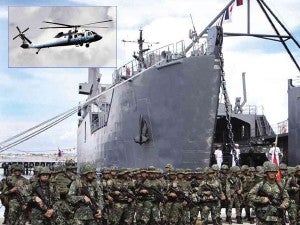 Marine soldiers stand in front of a logistics support ship during ceremonies welcoming President Aquino (arriving in helicopter, inset) during the 115th anniversary of the Philippine Navy held in Cavite City in mid-May this year. FILE PHOTO

MANILA, Philippines—Four overhauled Navy aircraft were deployed in parts of the country to secure the archipelago, the military said.

The aircraft went through the mandatory scheduled maintenance inspection, which include the repair and refurbishment as well as the retraining of its crew.

“SMIs are required for all Navy aircrafts whenever they reach a total of 50, 100, 300 and 500 hours of flying time. This is necessary to ensure the safety and capability of our aircrafts when they are deployed in the operational areas,” Rodriguez said.

The Islanders were deployed in San Fernando City in La Union; Cebu; Palawan and Zamboanga.

The Navy has about 10 Islanders and Cessna planes in its inventory.