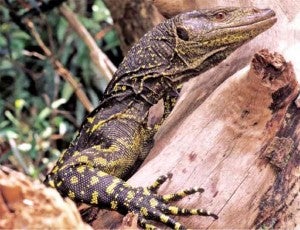 The northern Sierra Madre forest monitor lizard, Varanus bitatawa, is one of the largest species of monitor lizard known from the Philippines. Indigenous Dumagat and people of the Sierra Madre Mountains call the lizard bitatawa or baritatawa.

Bitatawa is an arboreal species, spending most of its time above the forest floor perched on trees with heights of over 20 meters.

It inhabits intact low-elevation rainforests from near sea level up to an elevation of about 500 meters. Adult lizards may reach a total length of nearly 2 meters. The body is generally black and covered with bright, golden yellow spots, while the limbs are olive yellow and the head has yellow mottling.

Bitatawa is endemic to the Philippines and is found mainly in the northern parts of the Sierra Madre Mountain Range of Luzon. It has been recorded in a few localities in the provinces of Cagayan, Isabela and Aurora.

Current threats to the species include habitat destruction (especially of the lowland dipterocarp forest and beach forest) and rampant collection for the illegal wildlife trade.