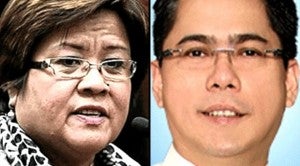 “I don’t know about those things or if these are confirmed. But what I know is that this is probably part of the ongoing demolition job against him in an effort to undermine his credibility as a provisional state witness,” De Lima told reporters on Friday.

Cunanan has alleged that two senators had a direct hand in the irregular transactions that led to the siphoning off of funds from the congressional pork barrel, or the Priority Development Assistance Fund (PDAF), into ghost projects of fake nongovernment organizations (NGOs) accredited by the TRC.

Following his emergence as a prospective state witness in the P10-billion pork barrel scam case, allegations came out that Cunanan traveled a lot with his family and owned a fleet of luxury vehicles. He also reportedly lives in the exclusive White Plains in Quezon City.

An ABS-CBN television report the other day claimed that Cunanan was living in a P40-million mansion and that a dark green Nissan X-Trail was found parked in front of the house. The report noted that these two properties were not reflected in Cunanan’s 2012 statement of assets, liabilities and net worth (SALN).

Cunanan and his lawyer Levito Baligod on Friday declined to comment on charges that the government executive led a lavish lifestyle.

Earlier, Cunanan said he was willing to undergo a lifestyle check and open his bank deposits to government investigators’ scrutiny to prove that he did not profit from the P10-billion pork barrel scam.

A lawyer for Sen. Ramon Revilla Jr., one of the senators facing plunder charges in connection with the P10-billion scam, said Cunanan should not make a media spectacle of his assets declaration.

“If Cunanan wants to disclose his assets and open his bank accounts for examination, he should just do it, and not only announce it in the media,” said lawyer Joel Bodegon.

“He should submit a sworn inventory of his, including his wife’s, assets and submit his and his wife’s bank records to the DOJ (Department of Justice) and the Senate for inspection and examination of whoever is interested, and not make a media spectacle of his intentions,” Bodegon added.

“Words are empty unless backed up by action,” he said.

Cunanan, who was one of those charged along with Revilla, Sen. Jinggoy Estrada and Senate Minority Leader Juan Ponce Enrile in connection with the P10-billion pork barrel scam, has executed an affidavit in which he alleged that Revilla and Estrada had called him to make sure their pork barrel allocations went to their chosen NGOs, which were part of the dubious organizations controlled by alleged scam mastermind Janet Lim-Napoles.

Revilla and Estrada have denied ever dealing with Cunanan.

Under the scam, the lawmakers’ pork allotments are coursed through line agencies like Cunanan’s TRC and then released to the Napoles NGOs.

The Napoles NGOs, through ghost projects, then converted the public funds into kickbacks distributed to the conspirators, allegedly including the lawmakers and functionaries of the line agencies as well as Napoles.

Before Cunanan, another respondent in the scam case, Ruby Tuason, was also granted provisional state witness status after she said she personally delivered kickback money to Estrada and lawyer Jessica Reyes, Enrile’s former chief of staff.

De Lima said Cunanan has so far been bearing the brunt of what she said were demolition jobs against the scam witnesses. She said whistle-blower Benhur Luy and Tuason had also suffered attacks on their reputation and credibility.

“It appears the demolition job is worse with Mr. Cunanan, but as I told you, he’s bracing himself psychologically for more of this demolition job,” she said.

De Lima said she recalled Cunanan’s lawyer telling her last week that strangers had been “cruising” the houses of Cunanan and members of his family.

“There were sightings of surreptitious filming of a supposed house owned by the family of Mr. Cunanan [his lawyer said].  That is why he (Cunanan) already anticipated these efforts [to demolish his credibility],” she said.

Sen. Alan Peter Cayetano has called for the creation of special courts to try the pork barrel scam cases on a daily basis to ensure the swift administration of justice.

Cayetano said this would need no legislation as the Supreme Court can designate special criminal courts on its own, as was done during the presidency of President Fidel Ramos.

He said special courts were designated to try and decide cases of kidnapping, robbery, dangerous drugs, car theft and other heinous crimes under Republic Act No. 7659 “in the interest of speedy and efficient administration of justice…”

Meanwhile, Sen. Joseph Victor Ejercito, Estrada’s half-brother, said he was alarmed by the rate at which the DOJ has been accepting state witnesses.

“If they are guilty, they, too, should pay for the crimes they committed. Only those who are the least guilty should be allowed to turn state witness,” Ejercito said at a press conference in Bacolod City on Thursday.

He noted that allowing those involved in scams to become state witnesses might encourage others to commit similar offenses in the belief that if they were caught, they could be absolved.

On alleged involvement in the scam of his half-brother, Ejercito maintained that even if he has a responsibility as a family member, he also has his mandate to fulfill.

“I have an accountability as an elected senator to the millions of people who voted me into office,” he said.

He said that although he and Estrada had a rift during the last elections they are not fighting now.

But Ejercito said due process should be given to the senators who have been linked to the pork scam, and that the administration should not be selective in going after the opposition only.

“We want to know the truth, but justice should not be colorblind, it should apply to all,” he said. With Gil C. Cabacungan and Carla P. Gomez, Inquirer Visayas