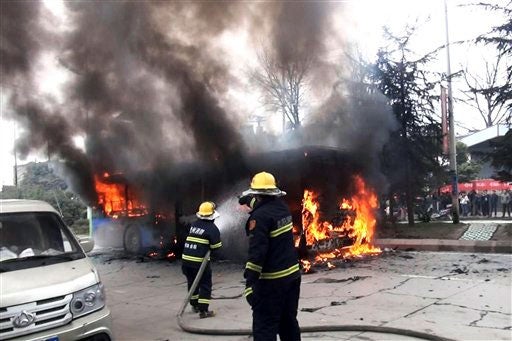 In this Thursday Feb. 27, 2014 photo, firemen sprays water on a burning bus in Guiyang, in southwestern China’s Guizhou province. AP

BEIJING, China—Chinese authorities said Friday that they have identified a person suspected of setting a fire aboard a bus that killed six people and injured 35 others this week in the southwestern city of Guiyang.

Guiyang police did not name the person in a one-line announcement posted on their official microblog. The police did not say whether the suspect was on the bus at the time of the fire, or anything about a possible motive.

The official Xinhua News Agency later identified the person by the surname Su, and said Su lit a gasoline barrel on the bus to take revenge on society. State-run China Central Television said the suspect suffered minor back injuries, and was in police custody and under interrogation.

The bus caught fire near an elementary school Thursday. Media reports said about 50 people were inside the vehicle at the time.

One witness said the bus was no more than 20 meters from him when he heard an explosion.

“After some sparks gleamed in the middle of the bus, it all of sudden got engulfed in a sea of flames,” Zeng Xi said. “I couldn’t see how many passengers were on the bus because of the dark smoke, but noticed a middle-aged man jump out a window. It only took a few minutes for the inferno to destroy the whole bus.”

Last year, a Chinese man set fire to a commuter bus in the southeastern port city of Xiamen, killing himself and 46 others. A deadly bus fire in 2009 killed 27 people, including the arsonist, in the central city of Chengdu. Both men were believed to be settling scores with society in China, where tensions have been on the rise because of growing gaps in wealth and a lack of social security.