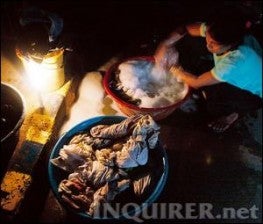 MANILA, Philippines—Most of Mindanao’s power system was back online Friday after a day of disruptions due to still-unknown reasons, the authorities said.

While the cause of the island-wide blackout on early Thursday was still under investigation, the rotating outages were occurring in parts of Mindanao where power had been restored.

Energy Secretary Carlos Jericho Petilla said in a briefing that 80 to 85 percent of power is back online in Mindanao. So far, only the Steag State Power Inc. (SPI’s) Mindanao coal-fired power plant in the PHIVIDEC Industrial Estate in Villanueva, Misamis Oriental, was still down.

The National Grid Corp. of the Philippines, which operates the country’s transmission superhighway, reported that SPI’s Mindanao coal plant was working  normally before the system-wide disruption that apparently started with the circuit breaker at the antiquated Agus 1 hydroelectric power plant in Marawi City, Lanao del Sur. Afterward, the Mindanao coal plant had problems getting back online.

While the Mindanao coal plant was down, state-run National Transmission Corp. (TransCo) president Rolando Bacani said, there were two-hour rotating power outages in service areas. Before the system-wide disruption, there were one-hour rotating outages on the island.

Petilla said DOE and TransCo were investigating the cause of the disruption and were collating reports not only from NAPOCOR and NGCP but also from several power plants which stopped operating, one after the other, in what was termed a “cascading” system-wide disruption.

The management and operation of TransCo’s nationwide transmission system was privatized and turned over to NGCP in 2009 but ownership of all transmission assets remained with TransCo. As owner, TransCo ensures NGCP performs well and follows DOE policies; handles all existing cases, including right-of-way and claims which accrued prior to the turnover date; divests remaining sub-transmission assets to technically and financially qualified electric distributors nationwide; and undertakes the operation, maintenance, consultancy and other technical services for the Philippine Economic Zone Authority (PEZA).

Asked if heads would roll, Petilla said the priority was to work together to get optimal power back and then gather all needed information under a joint probe. “If there is really negligence, then yes. But first TransCo and DOE will conduct an investigation.”

Separately, SPI said through an advisory that Units 1 and 2 of the Mindanao coal plant went offline early Thursday following the reported Mindanao systems disturbance at around 3:53 am. Each unit has a net generating capacity of 105 MW. Initial reports indicated that the Pulangi and Agus hydro plants tripped, followed shortly after by the Mindanao coal plant.

SPI’s power plant is currently Mindanao’s most modern and biggest interms of unit capacity. SPI said that since starting operations in November 2006, the power plant has delivered more than 10B kWh of electricity to the Mindanao grid, representing about a fifth of the island’s total electricity supply. SPI also said the power plant has sustained a reliably high availability performance of more than 90 percent.

SPI is principally owned by Steag GmbH, which is one the largest electricity producers in Germany. Steag GmbH also ranks among the German market leaders in the generation of electricity and heat from mine gas and biomass and is one of the leading developers and operators of district heating systems using geothermal sources for power.