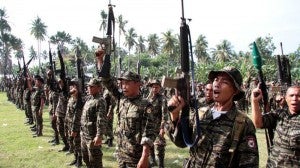 MANILA, Philippines — Philippine President Benigno Aquino III is on the brink of an accord to end one of Asia’s longest and deadliest rebellions, but renegade guerrillas, hostile politicians and the nation’s highest court lie in potential ambush.

If successful, the accord would end a conflict that began in the 1970s, claimed an estimated 150,000 lives and condemned large parts of the fertile southern Philippines to violence-plagued poverty.

But, after 18 years of stop-start negotiations that produced repeated false dawns, even Aquino’s peace chiefs are warning that the toughest stages are yet to come.

“We can expect that there will be a lot of difficulties,” said university professor Miriam Ferrer, who led the government negotiators.

“If the negotiations were hard, so much more the implementation.”

As the process gets under way, the government will need to stamp out the threat of other armed groups in the still-largely lawless region who oppose peace.

It may only have a few hundred armed followers, but in 2008 it attacked Christian towns across the south in an effort to destroy a previous peace plan, leaving more than 400 people dead and displacing 750,000 others.

“Neutralizing the BIFF will be a big help to the autonomous political entity. It would be one headache less with the spoilers taken out,” regional military spokesman Colonel Dickson Hermoso told Agence France-Presse.

One is the MILF’s rival Moro National Liberation Front (MNLF), which signed a peace deal in 1996 that is regarded by Aquino as a failure.

Misuari’s men never gave up their arms, allowing the region to suffer from banditry and political warlords with their own private armies.

Tensions are expected to be nearly as high in Manila, where Congress must swiftly pass a “basic law” creating the Muslim self-rule area.

This would cover about 10 percent of the mainly Catholic nation’s total land, with its own police force, a regional parliament and power to levy taxes — all powderkeg issues.

“Congress is the main battleground. Congress can make or unmake things,” said Steven Rood, country director for the US-based Asia Foundation and a member of a monitoring team invited by the negotiators to observe the peace process.

Political analyst Rommel Banlaoi also warned some Christian politicians from the planned autonomous region were hostile to the idea of power-sharing as this would dilute or destroy their power bases.

“Some congressmen do not believe in the peace agreement and will reject (the proposed law)… or will find ways to delay the whole thing,” Banlaoi, president of the Philippine Institute for Peace, Violence and Terrorism Research, told AFP.

Opponents are also widely expected to challenge the creation of a Muslim autonomous region in the Supreme Court.

However Teresita Deles, Aquino’s chief adviser on the peace process, said the government was confident it would be able to defend the deal against any legal challenge.

Aquino had warned his negotiators to “learn lessons from the past” and offer only concessions allowed by the Philippine constitution, Deles told reporters.

Aquino has only a narrow window in which to deliver his end of the bargain before his single six-year term ends in mid-2016, with no certainty his successor will share his vision.

That means Congress must pass the law by next year, to be ratified in a referendum within the succeeding four months by voters within the planned autonomous region.

Despite all the obstacles, the government and others involved in the process are cautiously optimistic that peace will be achieved.

“The timetable is definitely tight, but doable,” the Asia Foundation’s Rood said.