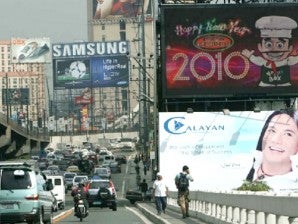 A Makati judge has ordered the Department of Public Works and Highways (DPWH) and Metropolitan Manila Development Authority (MMDA) to stop their crackdown on gigantic billboards displayed on major and secondary thoroughfares in Metro Manila.

The temporary restraining order (TRO) dated September 1 was issued by Judge Elpidio Calis of the Makati Regional Trial Court Branch 133 based on a petition filed by the Outdoor Advertising Association of the Philippines (OAAP).

It stops the two government agencies from enforcing and implementing MMDA Memorandum Circular 10 series of 2011 (“Implementing Guidelines of MMDA Regulation No. 04-004 Series of 2004, the Memorandum of Agreement (MOA) Between DPWH and MMDA Concerning Clearances and Permits for Billboards and Advertising Signs”).

In addition, it also blocks them from enforcing MMDA Regulation No. 04-004 (“Prescribing Guidelines on the Installation and Display of Billboards … and Providing Penalties for Violation thereof”); as well as the MOA under which the DPWH deputized the MMDA to implement provisions of the National Building Code.

“Thus in the exercise of its sound discretion, in order not to render any judgment in this case ineffectual, and considering further the irreparable injury that may be sustained by the petitioner if the acts sought to be enjoined are continued, this Court hereby grants the issuance of a TRO directing the public respondents, their officials, employees, representatives and all other persons acting on their behalf to maintain the subject matter in status quo until a hearing can be had to determine the propriety of the injunctive relief,” the judge said in his order.

The court set the hearing on OAAP’s petition for prohibition and application for writ of preliminary injunction on September 16.

OAAP had claimed that the MMDA acted unlawfully and disregarded the propriety rights of its individual and corporate members when it dismantled and rolled down advertising materials posted in several areas in Metro Manila.

MMDA Chairman Francis Tolentino, meanwhile, expressed dismay and frustration over the TRO issued by the court.

“Metro Manila is fast becoming the billboard capital of the world and unless something drastic is done to at least regulate [their] proliferation, we can never stop the rapid invasion of these visual eyesores,” he said in a statement.

The MMDA chief also noted that the court heard OAAP’s petition on September 1 and issued the TRO on the same day.

The MMDA-Legal Service Department received its copy of the TRO on September 2, he added.