Aquino refuses to budge on rights board appointment 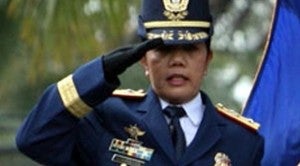 CEBU CITY, Philippines—President Aquino on Tuesday rejected demands that he withdraw the appointment of Lina Sarmiento, insisting that the former police director was the right person to “fend off” a supposed effort to “sabotage” the compensation of victims of human rights violations during martial law.

“I am sure that there are at least two camps that don’t want this board to succeed,” he told reporters in Filipino, referring to the Human Rights Victims’ Claims Board now headed by Sarmiento.

Citing Sarmiento’s “experience” and “physical ability,” Aquino said the new claims board chief could “fend off those who would want to sabotage what this law intends to do.”

The President was referring to the Human Rights Victims’ Reparation and Recognition Act of 2013, which recognizes human rights violations under the dictatorship of Ferdinand Marcos and provides a mechanism for the compensation of victims.

He said one camp didn’t want to “put on record that there was once a time that the government you established to ensure the welfare of the people ended up abusing them.”

The second group purportedly wanted to “get control over the fund” and didn’t want human rights victims to be compensated.

The President said that “whoever would chair the board” would have to contend with these two groups.

“Lina Sarmiento has not started her first day at work. Yet so many people are already criticizing her,” he said.

The President vouched for Sarmiento’s capability to lead the claims board, pointing to her experience in “tackling human rights issues, which I think, is the essential skill necessary.”

In Manila, the Human Rights Victims Claims Board vowed to expedite claims processing and reparations for the victims of martial law.

“The real lessons and true meaning of the 1986 People Power Revolution will remain incomplete for as long as justice remains elusive for the thousands of human rights victims,” the board said in a statement issued by the Commission on Human Rights.

“The victims’ struggles inspired the Filipino people to topple the dictatorship 28 years ago,” it added.—With a report from Cynthia D. Balana