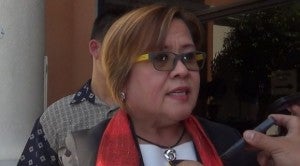 MANILA, Philippines—Justice Secretary Leila de Lima on Tuesday urged the creation of a new policy on rice importations to prevent local markets from being saturated by imported rice.

De Lima told reporters that the existing policy being implemented by the Department of Agriculture and the National Food Authority is the continued imposition of quantitative restriction, or QR.

QR allows member-countries of the World Trade Organization to restrict the importation of sensitive agricultural products like rice. However, QR restrictions expired on June 30, 2012, which, importers argued, meant that import permits for rice were no longer required.

This is the reason courts are already issuing restraining orders against the Bureau of Customs from seizing imported rice.

De Lima said, however, that the issue of QR being extended is still subject of discussion by WTO members. She also expressed hope that the Cabinet would take up the matter as well as the creation of a new policy on rice importation.

“There are economic implications beyond agriculture. We want a clear policy guidance,’’ De Lima said.

De Lima earlier admitted that the issue on the lifting of the WTO-QR on the importation of rice has “hanging issues on interpretation” that needs immediate resolution.

De Lima’s admission came even as officials from both the Legislature and Executive had downplayed the issue as nothing more than a “gray area” allegedly being used by traders to illegally import rice into the country.

“The international law was ratified by the President and concurred by the Senate, and has [since] become part of our body of laws. Kailangang sagutin ang tanong, alin ba ang mag-pre-prevail, ang [We have to answer the question, which should prevail, the] WTO Agreement or the domestic law,” de Lima said in an interview.

In two hearings of the Senate agriculture committee on rice smuggling, senators urged the Department of Justice to issue a “definitive position” that would “plug loopholes” on the matter of whether the country could still limit private-sector importation of rice despite expiration of the WTO-granted privilege in June 2012.

While there is already an initial position taken by the DoJ, De Lima refused to disclose the DoJ’s position on whether the country was bound by its commitments to the WTO since the matter was pending in the courts.

“We are currently studying the matter and we are looking at varying interpretations. Now if we go by the strict legal sense of the issue, I’m afraid we have some problem there. Because, as we very well know, the WTO, that is a commitment. That forms part of the law, the maxim pacta sunt servanda [agreements must be kept],” de Lima told the Senate panel.