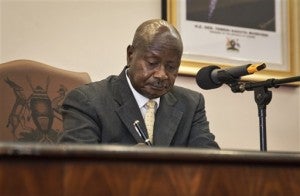 ENTEBBE—Uganda’s president called homosexuals mercenaries and prostitutes Monday as he signed off on one of the world’s toughest anti-gay laws, defying warnings from Western donors.

Yoweri Museveni said he could not understand how one could “fail to be attracted to all these beautiful women and be attracted to a man” instead and described in lurid detail his particular revulsion to oral sex.

“That is a really serious matter. There is something really wrong with you,” Museveni, a devout evangelical Christian who has been in power nearly decades, said of gay men.

The bill he signed into law holds that repeat homosexuals should be jailed for life, outlaws the promotion of homosexuality and requires people to denounce gays.

“You push the mouth there, you can come back with worms and they enter your stomach because that is a wrong address,” he said of gay oral sex.

The signing of the law came despite fierce criticism from US President Barack Obama, who has warned that ties between Kampala and Washington would be damaged.

The bill will provide a stiff test for foreign donors, with Museveni warning Western nations not to meddle in the central African nation’s affairs, and that he was not afraid of aid being cut.

“Outsiders cannot dictate to us, this is our country,” he said. “I advise friends from the West not to make this an issue, because if they make it an issue the more they will lose.”

Diplomats and rights groups had pushed for Museveni—already under fire from key Western donors over alleged rampant corruption and for stifling opposition groups and media—to block the legislation.

But Kampala is also a key Western ally in the region, where it is seen as a bulwark against the spread of radical Islam and has volunteered thousands of troops to battle Somali militants linked to Al-Qaeda.

“If the West does not want to work with us because of homosexuals, then we have enough space to ourselves here,” Museveni added, accusing those who told Uganda how to act were guilty of “social imperialism.”

UN High Commissioner for Human Rights Navi Pillay warned the law was “formulated so broadly that it may lead to abuse of power and accusations against anyone.”

Some donors were quick to punish Kampala by freezing or redirecting aid money.

The Netherlands froze a seven-million-euro subsidy to Uganda’s legal system arguing that “if the judiciary is to enforce such laws, we do not wish to assist that process.”

Denmark and Norway said they would redirect around six million euros each in government aid toward private sector initiatives, aid agencies and rights organisations.

The anti-gay bill cruised through parliament in December after its architects agreed to drop a death penalty clause.

The lawmaker behind the bill, David Bahati, praised the decision to sign it.

“This is the moment the world has been waiting for,” he told AFP. “We thank our president for taking such a bold move despite pressure from a section of foreign organizations. The law is for the good of Uganda, the current and the future generations.”

“I am officially a criminal for being a lesbian, something I have no control over,” Uganda gay rights activist Kasha Jacqueline also wrote on Twitter.

Homophobia is widespread in Uganda, where American-style evangelical Christianity is on the rise.

Gay men and women in Uganda face frequent harassment and threats of violence, and rights activists have reported cases of lesbians being subjected to “corrective” rapes.

In 2011, prominent Ugandan gay rights campaigner David Kato was bludgeoned to death at his home after a newspaper splashed photos, names and addresses of gays in Uganda on its front page along with a yellow banner reading “Hang Them.”