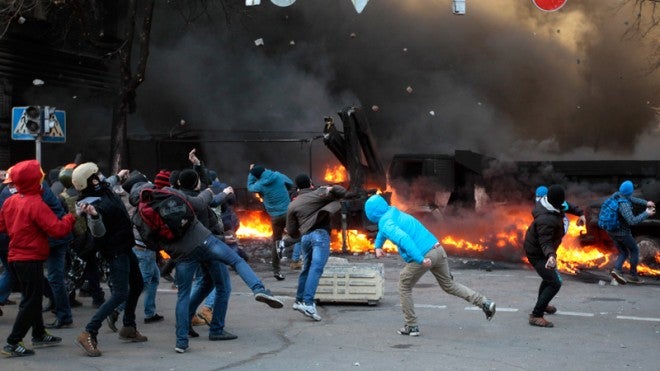 Anti-government protesters clash with riot police outside Ukraine’s parliament in Kiev, Ukraine, Tuesday, Feb. 18, 2014. Ukraine’s festering political crisis took a deadly turn Tuesday, as thousands of anti-government protesters clashed with police outside Ukraine’s parliament. Police said that a third policeman had died in the clashes, bringing to eight the number of people killed by the violence. AP PHOTO/SERGEI CHUZAVKOV

KIEV, Ukraine—Police on Tuesday launched an assault on the main anti-government protest camp on Kiev’s Independence Square after the bloodiest clashes in almost three months of anti-government demonstrations, AFP journalists at the scene said.

Police said that a third policeman had died in the clashes, bringing to eight the number of people killed by the violence.

Flames tore through the protest camp as armored water cannon trucks rammed into protestors while riot police followed behind lobbing stun grenades as the iconic square descended into a war zone.

Demonstrators responded by throwing a hail of Molotov cocktails and rocks at security forces, and setting fire to part of the sprawling tent encampment where they had been demanding President Viktor Yanukovych leave power.

Police warned women and children through loudspeakers to leave the area as the assault began, saying that they were launching “an anti-terrorist” operation. An estimated 25,000 people remained on the square.

Speaking from a stage in the square as the assault was continuing opposition, leader Vitali Klitschko declared that protestors were “not going anywhere.”

“This a small island of freedom,” the former heavyweight boxer said.

Klitschko added that Yanukovych had called him offering negotiations but had been told to first withdraw the riot police.