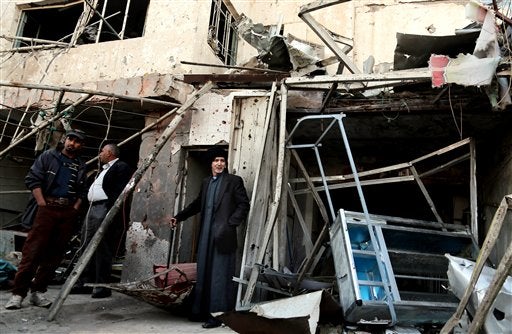 Civilians inspect the site of a car bomb attack in the eastern Ur neighborhood of Baghdad, Iraq, Tuesday, Feb. 18, 2014. AP

BAGHDAD, Iraq—Officials say a wave of car bombs in Baghdad and areas to the south has killed at least 33 people.

Police say all Tuesday’s attacks were explosives-laden cars parked in or near commercial areas and bus stations. In Baghdad, four such bombings killed at least 17 people and wounded 49 others.

They added that four car bombs went off simultaneously in different areas in the southern city of Hillah, killing at least 11 people and wounding 35 others. Hillah is about 60 miles (95 kilometers) south of Baghdad. Outside Hillah in the town of Musayyib, a parked car bomb explosion killed five civilians and wounded 13.

Medical officials confirmed the figures. All spoke on condition of anonymity as they were not authorized to release information.