Boats given to Leyte, Iloilo fishers who survived Yolanda 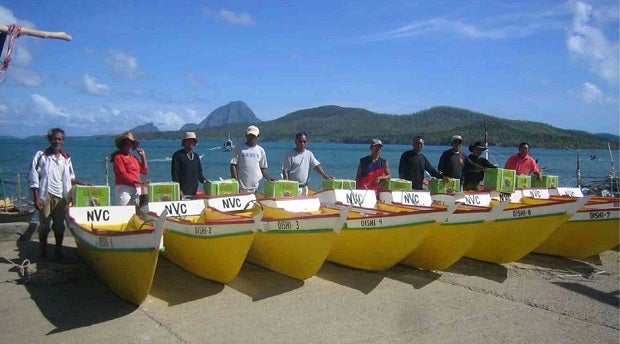 TACLOBAN CITY, Philippines — It looks like good fishing is ahead for 230 fishermen in the typhoon-hit areas of Leyte and Iloilo, who received fiberglass bancas from the Negrense Volunteers for Change (NVC).

“In our language, the symbol of love is no longer a heart—it is a boat,” read the message on the T-shirts of the NVC volunteers who delivered the Peter Project 2 boats on Saturday, a day after Valentine’s, which also marked the 100th day since supertyphoon “Yolanda” (Haiyan) struck.

Outfitted with 6.5-horsepower engines, the boats would finally enable the fisherfolk to go out to sea and start fishing again instead of having to rely on relief goods.

“They have not only restored the fishermen’s means of livelihood, they have given them their dignity back after they had to depend on relief goods since the typhoon,” Tacloban City Vice Mayor Jerry Yaokasin said of the NVC.

Rodel Lago, 43, of Barangay (village) 89, lost his house and boat to Yolanda, but received one of 50 boats given out in Tacloban City.

“We had become standbys waiting for doles. It is tiring not to be able to make one’s own living,” he said.

Another recipient, Francisco Ocada, saw the boats as a means to get their lives back to normal. Since Yolanda, he and his family have been living in a tent. His two children also had to drop out of college.

Mingo is an NVC-produced porridge made of powdered rice, mongo and malunggay mixed with water.

NVC president Millie Kilayko said the 230 bancas from donors all over the world brought to 500 the bancas they had distributed so far, out of 1,700 donations to date.

Meanwhile, the social arm of the Archdiocese of Manila has allocated P70 million to provide livelihood for the victims of Yolanda.

Fr. Anton Pascual, executive director of Caritas Manila, said the amount was on top of the initial P500 million the Catholic Bishops Conference of the Philippines-National Secretariat for Social Action had allocated for the Church’s rehabilitation efforts in provinces devastated by the typhoon.

“We have already finished our relief operations for the Yolanda survivors and we have poured P100 million to the typhoon victims in about 10 provinces. Now, we are doing recovery and rehabilitation and the Archdiocese of Manila has P70 million for this purpose,” said Pascual on the Church-run Radio Veritas yesterday.

The initial funding will be used to build boats, repair schools and churches, particularly in Iloilo and Leyte, and provide other livelihood projects for the survivors of the deadly typhoon, according to the Church official.

But also on Radio Veritas on Monday, Borongan Bishop Crispin Varquez expressed his dismay over the national government’s lethargic response to the needs of the typhoon victims in his province, Eastern Samar.

Varquez said that aside from the bunkhouses bankrolled by the government, no other projects had been launched to help the typhoon victims. With a report from Jocelyn R. Uy

Lacson to proceed with rehab of ‘Yolanda’-hit areas sans NDRRMC