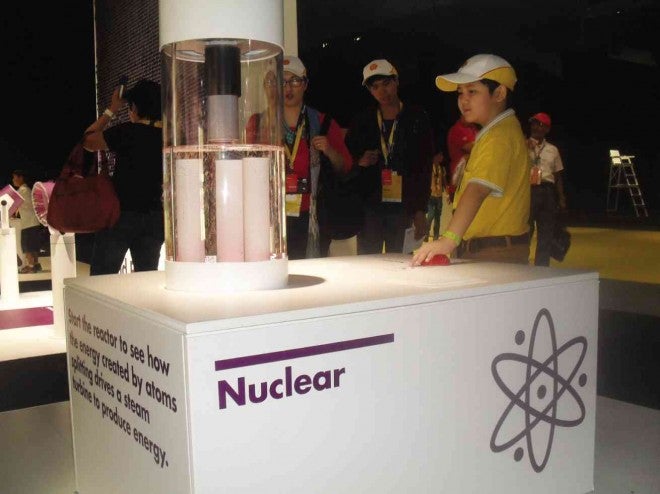 Learning how nuclear energy works with the press of a button

The importance of sustainability and innovation for the future of energy, technology and mobility was highlighted in the recent Shell Energy Lab (SEL).

Believing that awareness and education are key to solving some of the world’s major problems, Shell brought to the Philippines for the first time the interactive exhibit that also highlights man’s dependence on energy. 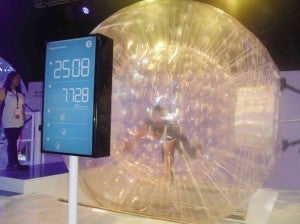 Running and tumbling inside a Zorb

As one of the main attractions of the recent Shell Eco-marathon Asia, SEL took visitors on an educational journey showcasing various facets of energy and tracing its journey from generation and harnessing to usage and management.

The exhibit aimed to show guests how much energy was needed to power the daily lives of human beings.

One of the most visited sections of the four-day exhibit at  Rizal Park in Manila was  the Kinetic Energy Dance Floor where people grooved to the beat of music played by a disc jockey.

The kinetic force created by their movements was  converted to electrical energy by a machine hidden beneath the platform. A monitor beside the dance floor showed the amount of energy produced.

Most of the displays allowed visitors to play and interact, while an explanation was readily available at the booth or online by visiting www.shellenergylab.ph.

“The main goal [of the exhibit] is for people to learn more about energy,” said SEL digital producer Kiley Leong. “I think that if you make things interactive, learning becomes easier for people… and stays in your mind longer.” 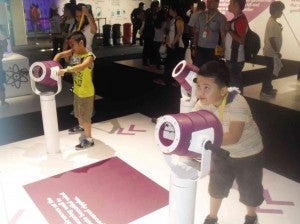 Finding out about wind energy by playing with “air cannons”

A good  example was the three “hamster balls” that functioned as power generators. Participants ran and tumbled like rodents inside giant Zorbs to create as much energy as possible within a given time.

The voting game was a quiz that challenged participants to answer questions in relation to the interdependency of food, water and energy. This was drawn from an existing National Geographic quiz.

The mini ecomarathon area allowed children and adults alike to build and customize their own toy cars, which were given upon registration. Each vehicle was designed to run on saltwater on a special race track.

At Energy Mix Interactive Area, an exhibit featured principles of science and technology in an easy-to-digest format. It showed how energy was produced from various traditional and alternative sources, such as wind, wave, solar, ethanol, nuclear, coal, oil, electric shock, etc.

Other parts of the lab showcased Shell’s heritage in the Philippines, its retail and commercial fuels technology, as well as its contributions, like the Malampaya Deepwater Gas-to-Power project, where a scale model was  on display. 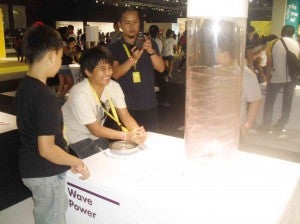 “The interactive experiences in the lab are fun yet informative, which Shell hopes will further inspire youngsters to continue learning about these fascinating topics,” Kanapi said.

Cris Paulo Hate, a computer engineering graduate from Technological Institute of the Philippines in Quezon City, had his hands full at Planet You where he tried to create his “ideal world.” He was surprised to see children younger than himself  creating a “more ideal world” that harnessed alternative energy and produced less pollution.

He said he was forced to ask himself, “If many people desire a greener world, then why aren’t we all helping each other to achieve that same dream?”