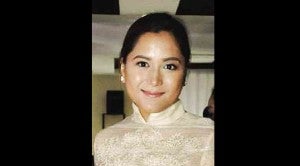 Parents and guardians of minors who run afoul of the law can no longer say “don’t blame me”—at least in Mandaluyong City.

Under a recently passed city ordinance, they can now be fined or sent to jail for being remiss in their duty to discipline children or teenagers who are apprehended for various offenses.

Considered a landmark law by its author, 1st District Councilor Charisse Abalos, the measure approved by the council on Feb. 7 maintains that a minor’s deviant behavior could be largely due to the absence or lack of parental supervision.

Charisse, 28, is a daughter of incumbent city mayor, Benhur Abalos.

She said parents and guardians face up to a one-year imprisonment or fines of up to P5,000 if found guilty by a court, which can cite the ordinance if their children have been booked for the following offenses: possession of deadly weapons, smoking and alcohol consumption, use of illegal drugs, gambling, and violation of the city’s 10 p.m. curfew.

The measure also lists driving without a license, riding a motorcycle without a helmet on or riding an overloaded motorcycle or tricycle.

In an interview on Saturday, Councilor Abalos noted that Mandaluyong had been consistently hailed as among the most child-friendly in the country because of its local government programs and policies.

“But ironically, we still see cases of out-of school youths doing this and that. The way we see it, with the situation now reaching this level, it’s already (about) the negligent parents,” she said.

The curfew ordinance, for example, is supposed to shield “impressionable” youngsters from the influence of street gangs, drug pushers and other criminal groups, but violators as young as 12 had been repeatedly caught, the councilor added.

“You return them to their homes and talk to their parents about it—and yet you see the same kids doing it again as if nothing happened,” she explained.

“The rationale behind the ordinance is that the first people who should be taking care of these minors and preventing them from becoming law offenders are the parents themselves,” she said.